“I designed five main set pieces,” Smith said. “I had to understand plotting a ground plan and using a scale ruler to draw larger than appearance. I also needed a strong understanding of micro building with thin plywood and foam core.”

“You drew sketches?” I asked.

“At first,” Smith said. “I switched to software for technical accuracy.” 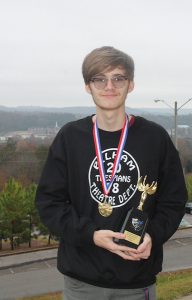 I asked Smith if he used InDesign. As a literary magazine staffer, he’s adept with InDesign, the Adobe product used with PhotoShop to create the magazine.

“I used CAD,” Smith said. “Being able to navigate CAD to create computerized final ground plans and models of the set was vital. I learned to draw ground plans and scale from Mrs. Stephenson—and the woodworking from my dad.”

“Since InDesign and CAD use the same bar style menu, CAD was easy to learn from Ms. Slawter last year in Intro to Engineering. We used CAD to design projects,” said Smith.

The software company’s website says that “CAD is engineered for what the future will bring.” Other PHS alums have shared that using InDesign in literary magazine and PhotoShop in Kim Hinds photography classes has aided their understanding of this complicated engineering design software.

Student transforming software creations into tangible products such as stage sets and magazines at PHS—along with the ability to study complex software in high school—helps PHS alums prepare “for what the future will bring.”