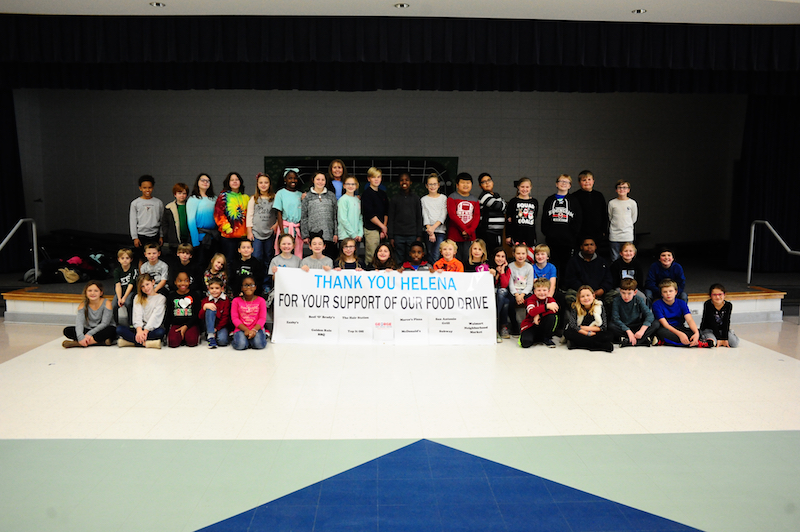 Students who helped collect the most cans during a “Bus Driver Challenge” food drive at Helena Intermediate School were honored on Dec. 11. (Reporter Photo/Graham Brooks)

HELENA–When Helena Intermediate School bus driver John Rodgers came up with the idea to start a two-week canned food drive to help families in need within the Helena community, he wasn’t prepared for the results that would follow.

Rodgers, along with other bus drivers at Helena Intermediate, began a “Bus Driver Challenge” food drive the week after Thanksgiving to see which bus could collect the most canned food items within a two-week period and students and drivers at HIS delivered.

What was supposed to be a two-week collection period was cut three days short because of an overwhelming response that resulted in more than 5,423 cans being collected to serve families in the community.

On Monday, Dec. 11, riders on bus No. 17-05 driven by Donna Channell and students that went above and beyond to collect cans for the food drive were honored in the school cafeteria for their efforts.

Helena Intermediate School Assistant Principal Holly Laney said this was the first time the bus drivers held a canned food drive and they organized everything on their own.

“John Rodgers started the plan for the food drive and he contacted all the sponsors on his own,” Laney said. “The bus drivers deserve all the credit for this. They are seriously the best. They also provided a full meal to a family on Thanksgiving and gave them a $100 gift certificate.”

During the two-week challenge, boxes were set up on each bus where riders placed their food items each day.

Students filed into the cafeteria on Dec. 11, where they were honored with cookies donated by the local Helena Subway for their achievements.

Lena Smyly, who will eventually be a student at Helena Intermediate School, went above and beyond by collecting more than 288 items at her birthday party a few days prior for the food drive. Another HIS student Eli Ray, who rides bus 17-05, brought in 432 items to donate just by himself.

All of the food collected will help families in Helena or be donated to a local food bank.