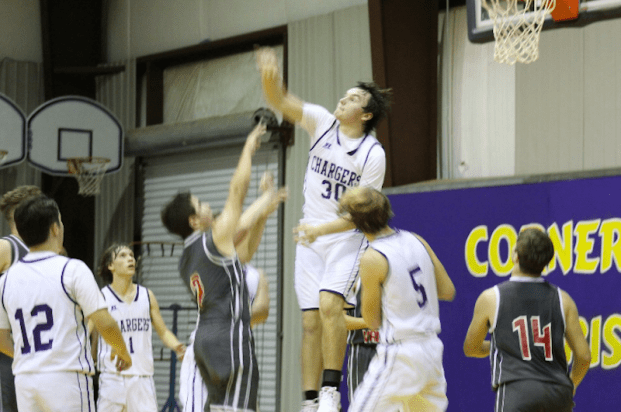 Cornerstone was able to pick up a 53-43 win over Kingwood thanks to a strong fourth quarter. (Contributed)

COLUMBIANA – After falling 48-35 to Kingwood Christian earlier this season, the Cornerstone Chargers used a strong fourth on Monday, Dec. 11, for a comeback win on their home floor.

It was a fourth quarter that saw the Chargers outscore the Lions 26-6 en route to a 53-43 win over the visitors.

Head coach James Lee said the team got off to a slow start in the game, but really turned up the heat late and played extremely well in the final quarter of action.

Heading into the fourth quarter trailing 37-31, Cornerstone came out on fire on both ends of the floor to post those 26 points in the winning effort.

Early on the two teams played a tightly contested game as each put up eight points in the first quarter. The Chargers saw four different players record a point in the period, while the Lions got points from three different players.

Kingwood stepped up its play in the second quarter and played much better on both ends of the floor as the Lions limited Cornerstone to just six points, while scoring 12 of their own.

It led the Lions to a 20-14 lead at the half thanks to a total of five different scorers in the first half and two 3-pointers in the second quarter.

The game became much more offensive in the second half starting in the third quarter with 30 combined points between the two teams. Kingwood still held steady with the lead, however, taking a 10-point 37-27 lead into the final frame.

This is when it just seemed to click for the Chargers as they dominated the final quarter on both ends of the floor, which led to outscoring the Lions 26-6 for the 10-point win.

A big reason for that success was 14 combined points from Ben Perryman and Tanner Faulkner in the quarter as each posted seven points. Ethan Cohen also had six in the quarter to help the cause.

Faulkner ended up leading Cornerstone with 21 points, while Cohen added 12 and Perryman posted 11. Rhett Garrett also got into the mix with 8 points of his own.

Birmingham Bulls have won 2 of last 3

By ALEC ETHEREDGE | Sports Editor A tough three-game road trip for the Birmingham Bulls came to an end with... read more