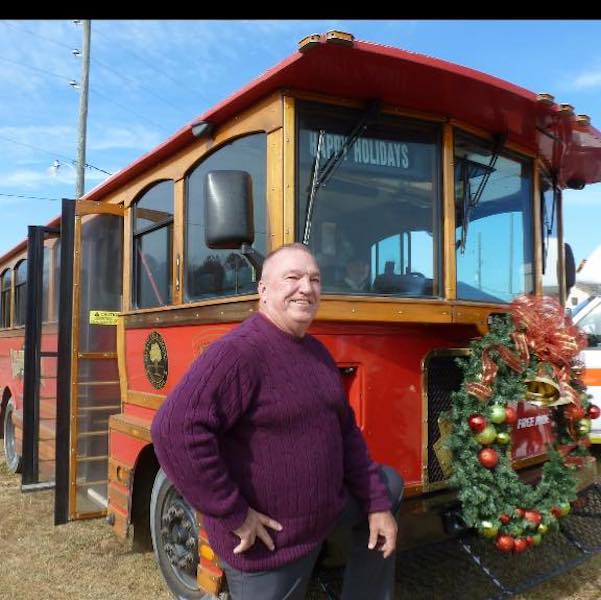 Mayor Stancil Handley served as the emcee of the "Holly, Jolly Trolly Christmas Tours, where one of Columbiana's well-known trolleys takes visitors around the city to look at the lights and learn about local history. (Contributed)

COLUMBIANA – One of the city of Columbiana’s well-known trolleys shuttled visitors around town to view Christmas lights and learn about local history during the annual “Holly, Jolly Trolly” tours at several times on the evenings of Thursday, Dec. 14 and Friday, Dec. 15.

“We’re riding out through the neighborhoods and looking at the beautiful Christmas lights,” said Columbiana Mayor Stancil Handley, who served as the event’s emcee. “It’s also a historical tour. If there’s a historical building or landmark, I share the facts about it.”

According to Handley, the majority of the tours sold out ahead of time and attracted visitors from Columbiana and other cities in Shelby County.

“It shows that there is an interest in Columbiana,” Handley said. “Everybody here is enjoying the revelry of the Christmas season.”

Alabaster resident and Meadow View Elementary School student Isaac McKenzie said this is the second year in a row that he and his family have gone on the tour. He said he especially enjoyed learning about the history and hopes to take a tour again next year.

“At first, my parents told me about it and it sounded fun,” Isaac said. “It was so much fun last year that I wanted to come back.”

This year’s “Holly, Jolly Trolly” tours were organized by Columbiana Main Street and serves as a fundraiser for the group’s beautification projects and to promote local Columbiana businesses.

Handley said the city started the tours a few years ago as a way to celebrate the acquisition of the city’s first trolley, and has since become a family tradition for many locals.

“People come and get on the trolley to have fun,” Handley said. “You’d think that it would get old after a while, but it doesn’t. I get to make new friends and meet new people every year.”

By GRAHAM BROOKS / Staff Writer HELENA–Now that all of the nominees have been selected, The Helena Beautification Board is... read more