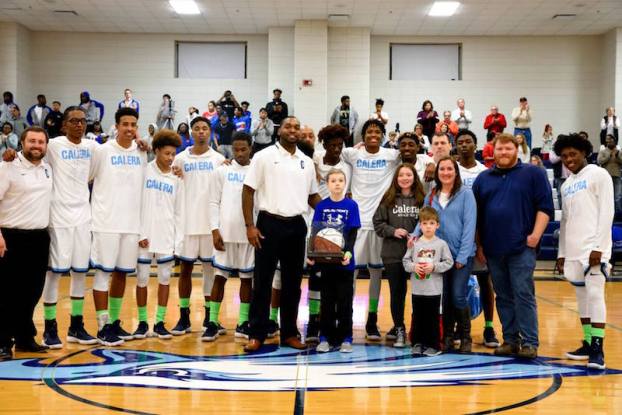 Thomas Bush, middle holding the cased basketball, was an honorary captain for Calera on Dec. 22. Bush has T-Cell Lymphoma, a form of cancer, and is currently undergoing chemotherapy. (For the Reporter/Larry Dancy)

Calera wins 8th in a row in special tribute game

CALERA – Cancer is a deadly disease that breaks the hearts of so many families each day and something no one should have the burden of dealing with throughout their journey in life.

While that’s the case, it’s something that is a reality and causes issues for so many people of all ages. Although it brings people down and can be a discouraging disease, there are always people trying to lift the spirits of those battling.

Bush was diagnosed with T-Cell Lymphoblastic Lymphoma this past summer and is currently in the process of chemotherapy treatments.

The Eagles decided to honor Bush at their game against Chilton County by by placing a donation bucket at the front door in which all proceeds would go to helping is family with the extremely expensive disease.

They also brought him out to half court before the start of the boys’ game to present a special basketball him that was signed by the entire team and staff.

Calera made him an honorary captain and dawned green socks in his honor as well.

As the captain of the team for the game, he helped the Eagles reel off a 69-48 win as the team picked up its eighth win in a row to move to 9-3 overall.

The strong performance was in large part due to Cornelius Brown’s 22 points in the game, 17 of which came in the second half. Three other players also scored in double figures as CJ Smith had 17, Jacob Smith posted 15 and Tyler Millin added 10.

The first quarter wasn’t indicative of the final score at all, however, as Chilton County jumped out to a 15-14 lead at the end of the quarter. Two made 3-pointers from the Tigers and three missed free throws from the Eagles was the difference early on.

Calera flipped the script in the second quarter by stepping up its effort on both ends of the floor. The Eagles were able to outscore Chilton County 16-11 in the period to take a 30-26 lead into the half. Six points apiece from CJ Smith and Millin in the frame helped pace the team. 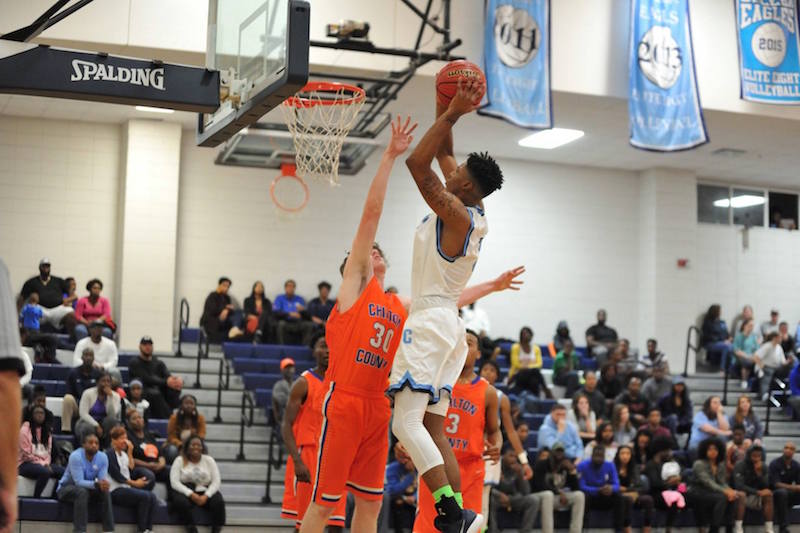 Tyler Millin goes up for a basket against Chilton County. (For the Reporter/Larry Dancy)

Brown came out of the locker room like a different player in the second half of the game posting a solid third quarter. He knocked down two 3-pointers, two jumpers and went 2-2 at the free throw line for 12 of his game-high 22 points.

Jacob Smith also had a strong quarter pouring in his second six-point quarter of the game.

Holding a 52-42 lead at the start of the fourth, Calera continued to apply the pressure. The Eagles went 4-4 at the free throw line and got six more points from CJ Smith to preserve the 69-48 win.

After a slow 4-15 start from the free throw line, Calera went 6-6 in the second half, which became a difference maker.

It was a win for the Eagles, but more importantly a win for Bush as he got the support of an entire community to help him pick up a much larger win in life.

By GRAHAM BROOKS / Staff Writer The Helena Huskies boys basketball team is being shown some love in the latest... read more