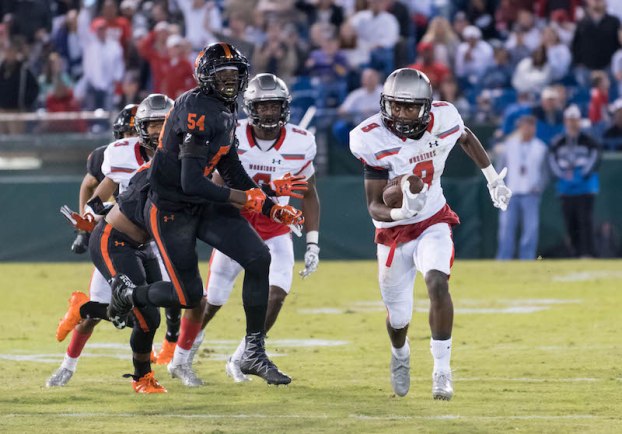 Thompson had a county-high nine players named to the 2017 All-State football team. (File)

A year later in 2017, the list—which is organized by the Alabama Sports Writers Association—featured an unbelievable 11 more players for a total of 31 county football players.

It’s a prestigious honor not just for those individual players, but the county as a whole. It shows the amount of hard work and dedication that each team put in from last spring all the way through the 2017 football season. These young players below represented the county stronger than possibly any class of players before them.

The Thompson Warriors’ unbelievable season, which you have read all about at this point, has been capped off with a county-high nine players being named to the All-State team in the 7A classification.

Three of those players found themselves on the first team, all on the offensive side of the ball. Quarterback Taulia Tagovailoa, the Shelby County Player of the Year and ABC 33/40 Player of the Year, earned the lone first-team quarterback slot and is up for Mr. Football as well. Tagovailoa is just a junior and will return for his senior season next year.

Wide receiver Ahmad Edwards and offensive lineman Amari Kight were also named to the first-team offense. Edwards set a state record for receptions in a season with 118, while Kight led an offensive line blocking for two elite running backs and an elite quarterback.

Another offensive player to make a splash was Shad Byrd, who was named as a second team running back. He finished second in the county with 1,164 yards and had 1,342 all-purpose yards.

Mackie McNeal joined Rayam on the second-team defense after posting 87 tackles from the defensive line position.

The Spain Park Jaguars also had two members join the 7A All-State team as Cole Star and Cedric Tooson both found themselves as honorable mention players. Tooson had 87 tackles this season, including 11 for loss and eight sacks; while Star knocked home 39 of 41 PATs and went 10-10 on field goals.

Oak Mountain added two more players, both to the second team, as center Jacob Feenker and defensive back Zach Nelson both got the honor. Feenker was referred to by his head coach as being the best center for the Eagles in the last six years, while Nelson wowed everybody this season.

Justin Stuckey was Helena’s only representation on the team after a remarkable season. Stuckey was named as an honorable mention player on the 6A team thanks to 45 receptions for 855 yards and seven touchdowns, giving him an average of 19 yards per catch.

In what was a strong year for kickers in Shelby County, Pelham’s Greg Blue was named as a 6A honorable mention kicker. Blue was 38-40 on PATs this season and 4-of-6 on field goals with a long of 42 yards. He also had 31 punts for 1,049 yards and helped the Panthers recover four onside kicks.

With just two less players named to the All-State team than Thompson, the Briarwood Lions finished second in the county with seven players finding a spot on the 5A team.

The Lions saw a county-high four players named to the first team— one on offense, two on defense and one athlete.

Offensive lineman Garrett Bell was the lone offensive player named to the first team after anchoring a line that blocked for a dynamic offense. One of the guys he blocked for was J.R. Tran-Reno, who got the not as a first team athlete.

Between running the ball, catching the ball and throwing the ball, Tran-Reno had 1,696 all-prupose yards and 28 touchdowns during his senior season.

The other two first teamers, both on the defensive side of the ball, included defensive back Cade Dickinson and linebacker Gabe Russell. Dickinson had 30 total tackles this season and a county-high five interceptions. Russell totaled 121 tackles, 11.5 sacks and 4.5 tackles for loss this season.

Michael Hiers also received the honor of making the team as an honorable mention quarterback. He ended the season with 2,902 all-purpose yards and 30 touchdowns.

Calera also had a strong presence on the 5A All-State team led by one first team player in offensive lineman Jayson Jones. Just a sophomore, Jones is already receiving offers from several SEC schools including two College Football Playoff teams in Alabama and Georgia.

Quarterback Cornelius Brown is also getting looks from big schools and made the second team as a junior. Brown threw for 2,334 yards and 25 touchdowns this season, while running for 128 yards and one additional touchdown.

Sophomore Trent Yowe was another player named to the second team as a defensive back. Yowe posted 75 total tackles, including 15 tackles for loss and also added two interceptions.

Zach Ford was named as an honorable mention kicker after going 40-46 on PATs and 5-6 on field goals.

The final kicker named to any of the All-State teams was Montevallo’s Jonathan Grisham. He was the only one to make first or second team as he took home second-team honors.

A year after being one of the best linebackers in the state, Tyler Olds was also found back on the All-State list as he was named as an honorable mention linebacker in the 3A classification.

An extremely impressive 2017 football season for the Vincent Yellow Jackets ended with three players named to the Class 2A All-State team.

The last player to find a spot was young sophomore offensive lineman J.T. Youngblood, who was named as an honorable mention player.