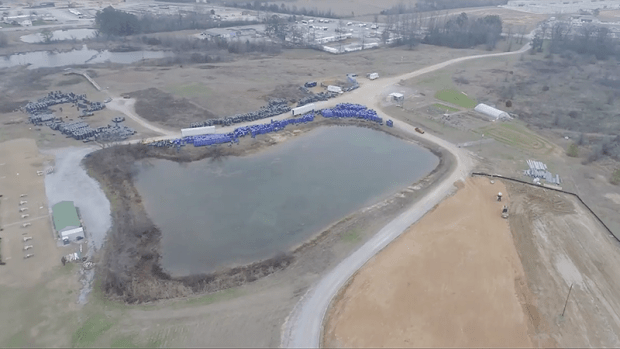 Thousands of garbage cans rest in Alabaster’s Limestone Park on Dec. 31, 2017, while the park serves as a staging area before the bins are shipped off by Advance Disposal. Construction on a facility to house the city’s garbage trucks continues in the bottom right of the photo. (Contributed/Kevin Henderson with Skybama.com)

ALABASTER – Crews are in the process of removing thousands of used garbage cans being stored at Alabaster’s Limestone Park in the wake of the city’s change in garbage service providers, while the situation has gained the attention of the Birmingham Audubon Society.

Alabaster began operating its municipal garbage service on Jan. 2 after transitioning from the previous contract provider Advance Disposal. In late December, Advance collected its garbage and recycling bins from city residences and placed them in Limestone Park as a staging area until the company could haul them off.

During a Jan. 4 work session, Alabaster City Manager Brian Binzer said the company was removing truckloads of trash cans “daily,” and will have them totally removed from the park “by next week.” He said Limestone Park was also used as a garbage can staging area in 2014 when the city changed vendors from Allied Waste to Advance Disposal.

After hearing reports of the garbage cans being stored at the park, the Birmingham Audubon Society, which maintains a birding area and works to preserve the environmentally sensitive wetlands and native prairie lands at the city-owned park, looked into the situation.

“Birmingham Audubon has been closely monitoring ongoing developments at Alabaster’s Limestone Park (regarding) the temporary staging of garbage cans near native-prairie plots and along roadways,” read a Jan. 4 Facebook post by Birmingham Audubon. “Conservation volunteer Ken Wills visited the site on Tuesday, January 2, shortly after word of the temporary garbage-can relocation began to appear on social media. While re-seeding the second prairie plot, Ken reported that disturbance to both of the plots was minimal, with can location limited to the plots’ front edges. The mowed trail extension remains intact and useable, although there has been minor damage to one of the prairie plot’s small informational signs.”

Birmingham Audubon said it has been in contact with the city since hearing reports of the garbage cans being staged at the park on Dec. 30.

“We can confirm from those conversations that the placement of garbage bins is temporary, and that the bins should be removed within the next few days,” read the post. “The city also assured our staff that the prior vendor responsible for temporary placement would be held to account for any damage done to the park. Staff members visited the site on Sunday the 31st and again this morning (January 4), and confirm earlier reports that the prairie plots have not been damaged, and that the mowed trail and bird observatory remain undisturbed. Staff also report the active removal of many garbage bins in progress at the site as of this morning.”

Crews with the Montevallo-based Wayne Davis construction company are also working to build a facility to house the city’s garbage trucks, which was approved by the City Council in late August 2017.

Several area residents have expressed concerns on social media about the potential environmental impact the truck facility could have once it opens, and Birmingham Audubon said it is monitoring the wildlife at the park for any signs of impact. The society does not plan to monitor water quality at the park, it said.

“The truck-servicing facility is still slated for construction as per the original plan. The hope is that impacts from that facility will remain largely localized to that section of the park,” the society posted. “We don’t have plans to monitor water quality once the facility is open, but staff and volunteers will monitor the wildlife utilizing the park.

“The city of Alabaster has been receptive to our concerns, and we will continue to work in good faith with them,” the society posted.