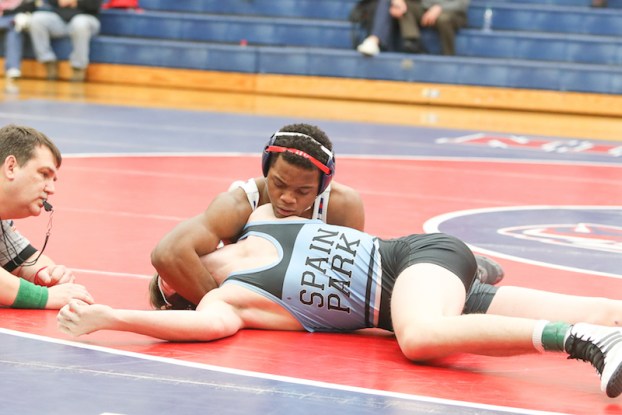 Oak Mountain’s wrestlers held on for a 41-30 win over region foe Spain Park on Thursday, Jan. 4, on their home floor. (For the Reporter/Dawn Harrison)

NORTH SHELBY – After each went up against Thompson in the previous two nights, Oak Mountain and Spain Park met on the mat in a pivotal region wrestling match on Thursday, Jan. 4, at Oak Mountain High School.

With both falling in dominant fashion to the Warriors, Oak Mountain 53-18 and Spain Park 66-9, the two teams were bound to be more competitive against each other.

That was just the case as the match came down to the final three matchups on the floor, before the Eagles were able to sneak out a 41-30 win over the Jaguars.

Patrick Neal picked up a pin over Fischer Harrison in the 106 division, Joseph Tolbert got a forfeit win in the 113 division and Cole Thomas got a 10-9 decision over Jack Rivers in the 120 division to give the Eagles three more points.

The Jags were able to take advantage of two forfeits in the next two wetight classes as Emmanuel Thuo and Caelan March picked up 12 combined points to cut into the lead.

Brett Cruce got the Eagles back on the winning track with a 10-1 major-decision win over Gaven Puklik in the 138-pound weight class to give Oak Mountain three more points to take a 19-12 lead.

Spain Park’s Dylan Adair answered right back with a decision win in the 145-pound weight class for the Jags to pull them back within four points.

The next three matches were a different story and a key in the outcome as Oak Mountain was able to pick up three consecutive pins from Harrison Kinsey, Justin Evans and Barrett Blakely.

Those three pins in the 152, 160 and 170 divisions gave the Eagles 18 additional points and a strong 37-15 lead heading into the final four matchups.

It was a stretch that forced Spain Park, trailing by 22 points, to have to win the next four consecutive matches all by way of pin.

Dash Rush got the Jags’ four-match stretch started off on the right foot with a pin over Aiden Taylor in the 182-pound weight class to give the Jags six of the 24 points they needed.

Andrew Moses gave everything he had for Spain Park in the next matchup and picked up a 3-2 decision win, but that was worth just three points and not enough to keep Spain Park’s hopes of winning alive.

Oak Mountain’s Jordan Davis went on to win the next matchup over Jaxon Best in the 220-pound division by way of major decision. Cameron Young ended up giving the Jaguars six more points with a pin in the final match as Spain Park ended up winning three of the last four matchups on the night.

By ALEC ETHEREDGE | Sports Editor The Evangel Lightning boys basketball team has been on a roll during the holiday... read more