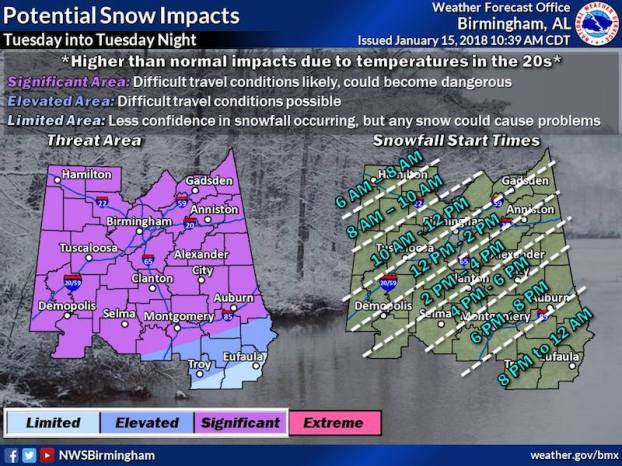 Meteorologists have predicted that up to two inches of snow will hit Shelby County on Tuesday, Jan. 16. (Contributed)

Up to 2 inches of snow expected for Shelby County

The U.S. National Weather Service of Birmingham recently issued a winter storm watch and a hard freeze watch for Shelby County, along with counties in central and north Alabama.

According to meteorologist Jody Aaron, the Birmingham Weather Service is expecting around one or two inches of snow, which could possibly hit Shelby County at around noon and end later in the evening.

“We can see it starting as early as noon, but more likely, we’ll see it closer to 3 p.m.,” Aaron said.

Because temperatures are expected to stay around the 20s on Tuesday and Wednesday, Aaron said the snow could cause roads to ice over and make travel conditions unsafe for drivers.

“While amounts may be low, the impacts could be significant. If you don’t have to travel, don’t get out,” Aaron said. “Any snow that falls will be able to stick. Overpasses will be affected for sure. The snow melting will be a hazard, because all of it will freeze back very quickly.”

Shelby County Schools announced that all classes and extracurricular events will be cancelled for the duration of Tuesday.

By NEAL WAGNER / Managing Editor The Alabama Department of Transportation is encouraging drivers to drive carefully and plan... read more