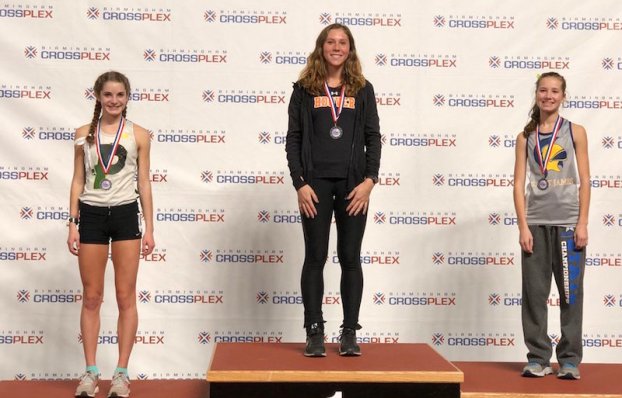 BIRMINGHAM – With the state championship indoor track and field meet now just two weeks away from Jan. 2-3, many local teams took the opportunity to compete in the 2018 MLK Indoor Track Classic at the Birmingham CrossPlex on Monday, Jan. 15.

Briarwood, Helena, Oak Mountain, Pelham, Shelby County and Thompson all had girls teams competing in the event and each had standout performances in at least one event if not many. Highlights from each team are included below.

Individually, the girls were highlighted as usual by junior McKenzie Hogue. She tied for Thompson’s highest individual finish at the event by taking second in the 800-meter race. Hogue finished the event with a time of 2:17.77, which was just 0.22 seconds behind Hoover’s Sydney Steely in a photo finish.

The only other Thompson runner to finish second was Ebony Butler in the shot put finals. The senior threw for a distance of 35 feet on the nose, which was just behind the winning distance of 37 feet 2.5 inches.

Other highlights started in the 1,600-meter run where sophomore Abby Grace Walker finished in 24th with a time of 5:59.58.

In the girls 60-meter hurdles, junior Madison Wright finished in 17th with a time of 10.08 seconds.

Zakiria Holifield, a sophomore for the Warriors, had the next highest finish behind Hogue and Butler. She finished seventh in the 60-meter dash finals with a time of 7.99 seconds, which was just 0.30 seconds behind the winner in a tight race.

Nicole Payne was Oak Mountain’s biggest highlight at the event. The junior, who is also strong on the soccer field and the cross country course, picked up a first place and fifth place finish at the event.

The junior not only won the 400-meter dash, but ran the fastest time in the country by finishing the race in 54.22 seconds.

Payne also finished fifth in the 60-meter dash with a time of 7.88, which was 0.21 seconds behind the winning time.

Pelham’s girls had possibly the strongest and most consistent day, which started in the 1,600-meter race with Kaite Strozier.

The junior was able to finish fourth in the event with a time of 5:16.79, which was three seconds off the winning pace. Strozier also had an impressive showing in the 3,200-meter finals with a finish of ninth thanks to a time of 12:11.07.

Erin Long fared well in the 60-meter hurdles with a finish of 11th thanks to a time of 9.94 seconds, which was less than a second behind the winning pace.

Erin finished the highest of the three in 22nd with a distance of 4 feet 10 inches. Just two spots down were Guthrie in 24th, followed by Emorie in 29th.

Guthrie had a top-20 finish in the girls pole vault finals where she took 17th with a height of 8 feet.

Sophomores Abigail Ford and Ana Watters continued their strong 2017-18 season with finishes of 23rd and 25th, respectively, in the girls 3,200-meter race.

Allison Tanner, a sophomore as well, finished 13th in the high jump finals with a distance of 5 feet.

Tanner picked up another top-25 finish in the triple jump event with a distance of 33 feet 3.5 inches.

Helena ended up with three top-30 finishers in the shot put finals as the event ended up being one of the Huskies’ strongest.

The Huskies also had a strong team finish in the 4X800-meter relay as they took home seventh place with a time of 11:17.30.

Briarwood’s girls had a few highlights at the event as well starting with Adrienne Goolsby in the 3,200-meter race. The freshman finished 25th in the event with a time of 13:27.21.

Lauren Musachia also picked up an 18th-place finish in the high jump finals. The junior finished with a distance of 4 feet 10 inches.

Another note-worthy performance was Gracie Wong’s finish of 30th in the triple jump with a distance of 30 feet 5.75 inches.

The Wildcats’ best finish in the girls events came from Emilie Chapple, who took home 48th in the 113-person 800-meter run. The sophomore finished with a time of 2:48.87.

By ALEC ETHEREDGE | Sports Editor BIRMINGHAM – The indoor track and field season is slowly coming to an end... read more