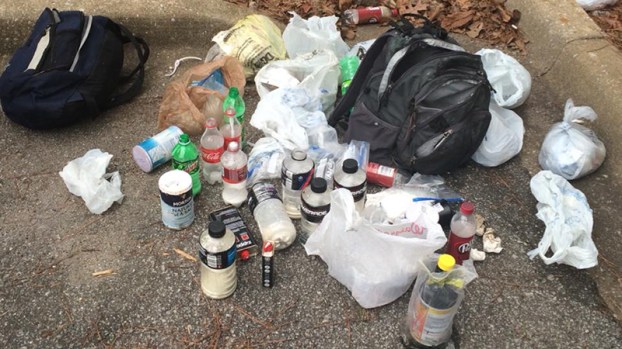 Shelby County Sheriff’s Office patrol deputies discovered a meth lab in an outdoor area off Alabama 119 in the Brook Highland area on Jan. 16, leading to the arrest of two suspects. (Contributed)

NORTH SHELBY – A pair of suspects are facing felony charges after Shelby County Sheriff’s Office deputies discovered a methamphetamine lab off Alabama 119 on Jan. 16, leading deputies to the discovery of a second meth lab in the suspects’ vehicle later the same day.

SCSO patrol deputies discovered the first meth lab in an outdoor area off Alabama 119 in the Brook Highland area, and called Shelby County Drug Enforcement Task Force investigators to collect evidence and deem the substances safe to handle before properly disposing of them.

“Within the same day, the deputies were able to follow up on their investigation and identify the parties involved with the original lab,” said Task Force Commander Lt. Clay Hammac.

The investigation led deputies to 38-year-old Alabaster resident Mitchell Wayne Smith and 40-year-old Birmingham resident Ashley Melissa Wallace, who were apprehended in a vehicle off U.S. 280 near the Eagle Point subdivision.

While arresting the two suspects, deputies discovered another meth lab in the suspects’ vehicle, Hammac said.

Second-degree unlawful manufacture of a controlled substance is a Class B felony. If convicted, the suspects could face up to 20 years in prison.

As of Jan. 18, neither suspect had court dates listed in Shelby County District Court.