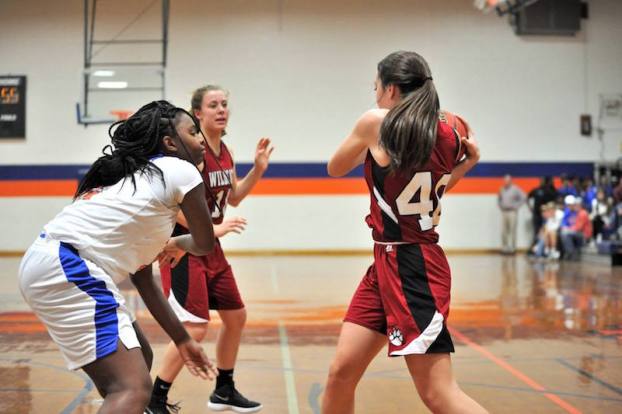 Shelby County's Maggie West, top without the ball, scored a game-high 26 points in the Wildcats' win over Chilton County. (For the Reporter/Larry Dancy)

CLANTON – A strong third quarter lifted the Shelby County Wildcats’ girls basketball team to a big rebound win over the Chilton County Tigers on Monday, Jan. 22, by a final score of 69-59.

The Wildcats, No. 10 in the Class 5A standings, were able to outscore Chilton County 24-13 in the quarter to build an insurmountable 54-39 advantage heading to the final quarter of play.

The game featured a battle between Shelby County’s Maggie West and Chilton County’s Jasmine Martin—a battle that kicked off in the opening quarter of play.

Martin drained six first-quarter points for the Tigers, while West poured in five of her own. The difference in the first period was the help West got from her teammates.

Shelby County got six points from Nataley Whitner in the quarter and four points from Skye Knighten-Lilly. Those points, in addition to West’s, led to 15 for the Wildcats.

The Tigers were only able to post four points from Adison Argent in addition to Martin’s six, which led to them trailing 15-10 after the first quarter.

The second quarter became much more of a free throw shooting contest thanks to physical play.

In a game that featured a combined 46 total fouls and 53 free throws, the two teams combined to shoot 17 free throws in the second quarter alone.

Neither team shot particularly well as the Wildcats were 2-5 from the line, while Chilton County was 4-12 from the line in the frame.

Despite getting out-shot at the free throw line and being put into foul trouble in the quarter, Shelby County was able to score 15 more points behind Knighten-Lilly’s six and three others scoring at least two.

The Tigers, however, posted 14 points in the quarter thanks to six more points from Martin, five from Argent and a 3-4 mark at the free throw line for Holley McKinnon.

Shelby County, with its one-point advantage in the period, was able to extend its lead to 30-24 heading into the half.

The third quarter was the difference in the game and it was all because of West finding her stroke on the offensive end of the floor for the Wildcats.

While it’s rare to see double digits at all from one player in the shortened eight-minute high school quarters, West came out and poured in 17 points in the third period.

Chilton County seemingly had no answer for West’s offensive production in the quarter as she drained seven baskets, three of which were from beyond the arc.

Her 17 points led to the Wildcats scoring 24 in the frame, while limiting the Tigers to just 15 points. The production gave Shelby County a 54-39 lead heading to the final quarter.

It was a lead the Wildcats drastically needed as Chilton County responded with 20 points of its own in the final quarter.

A big reason for that impressive quarter was due to West fouling out of the game along with Madison Purcell, while three other consistent Shelby County playmakers had four fouls.

The Wildcats still gathered 15 points in the period to counter the Tigers’ 20 points as Chilton County eventually ran out of time in the 69-59 loss.

West ended the night with a game-high 26 points in the win, while Knighten-Lilly added 16 points and Whitner 10 points to give Shelby County three scorers in double figures.

Chilton County was led by Martin with 15 points and Argent with 14 points, while Lexis Blackman and Shalisa White had eight apiece.

By ALEC ETHEREDGE | Sports Editor HELENA – Thanks to four clutch free throws in the final 44.6 seconds of... read more