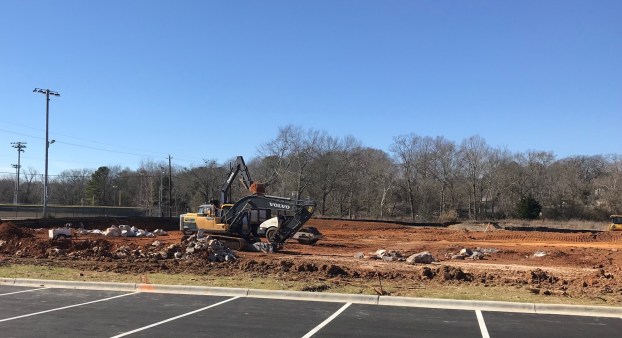 Crews are clearing the land adjacent to the Pelham Recreation Center in preparation for the construction of outdoor sand volleyball and basketball courts. (Contributed)

PELHAM – Construction is under way on the city of Pelham’s outdoor basketball and sand volleyball courts that will sit adjacent to the recently opened Pelham Recreation Center.

Parks and Rec Director Billy Crandall said construction crews began clearing the land where the courts will be built in mid-December. Crandall said the project is expected to be completed in April.

In November 2017, the Pelham City Council awarded the bid for the project to Wayne Davis Construction and it will cost $1.18 million. The city is partnering with Shelby County to complete the project.

The scope of the project includes four sand volleyball and two regulation-size basketball courts lit with LED lights, a 60-foot pavilion with restrooms and outdoor showers and 83 parking spaces. The outdoor complex will be located adjacent to the planned trailhead that will eventually lead to Oak Mountain State Park. The city also plans to build a dog park in Pelham City Park.

In July 2017, when the county decided to partner with Pelham on the outdoor courts project, Shelby County Manager Alex Dudchock said the project falls in line with the county’s plans to reinvest lodging taxes into tourism initiatives.

“This definitely ties in with our tourism initiatives,” Dudchock said. “This project will open the door for high school and collegiate sand volleyball tournaments and basketball tournaments.”

The location of the project is ideal for tournaments because of its proximity to Pelham’s lodging options on and near Cahaba Valley Road. With the rec center, new middle school and library being built so close by, extra parking space will already be in place.

When the facilities aren’t being used to host events, they will be available for residents to enjoy. Crandall said the rec center has already helped to create a community feel among residents, and the addition of the outdoor courts will bring even more people to the facility.

“I personally have seen and reconnected with people that I used to coach with years ago,” Crandall said. “I’ve seen kids grow up in this park and now they’ve graduated from high school and college and they’re coming back and going to the rec center to play ball or workout. They talk about how they wish the city had this when they were growing up. It’s just really given us that community feel and it’s awesome.”