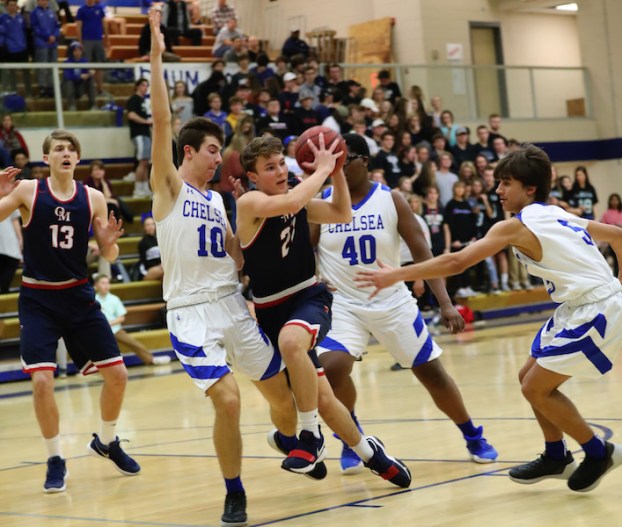 Oak Mountain's boys basketball team was able to hang on for a tight 44-40 win over county rival Chelsea on Tuesday, Jan. 30. (For the Reporter/Cari Dean)

CHELSEA – Despite a slow start in the opening quarter, Oak Mountain’s defense was able to lift the team to a 44-40 road win over county rival Chelsea on Tuesday, Jan. 30.

It marked the second night in a row that Zach Nelson stepped up to score in double figures as he posted 10 points in the win for the Eagles, while Chris Mayweather continued playing well with 13 points of his own to lead the team.

Although the ending was in favor of the Eagles (14-10), the start of the game certainly was not as Chelsea (12-14) came out strong on the defensive end in the opening period.

Two long possessions by the Hornets in the first few minutes of the game ended in Tyler Coleman free throws and a Sam Towery 3-pointer as the two seniors started strong on senior night.

After Daniel Washington hit two free throws and Michael Gibbs made a layup, Chelsea had grabbed a strong 9-2 advantage and carried a 9-4 lead into the second quarter.

This is when Nelson really stepped up. He was able to go on a 5-2 run to start the quarter, which gave him seven of the Eagles’ first nine points in the game.

It brought Oak Mountain to within two points at 11-9, before a back-and-forth battle ensued.

The Eagles eventually took their first lead of the game at 14-13 after two free throws, but Chelsea ended the second quarter on a quick 4-0 run, including a Jonah Moore buzzer beater to take a 17-14 lead into the break.

For the first few minutes of the third quarter, the back-and-forth battle continued as the lead changed hands three times before Oak Mountain was able to go on a strong run.

Turner Griffin hit a 3-pointer from the corner to cut into the Hornets’ deficit, but shortly after, Mayweather got an offensive rebound and put back and Drew Dunn hit a 3-pointer at the buzzer to extend Oak Mountain’s lead to 31-24 at the end of three.

The Eagles used a 17-7 run in the third quarter to take control of the game.

Early in the final quarter, Oak Mountain was able to extend its lead to eight at 38-30, but Chelsea wasn’t ready to fold.

The Hornets battled back to within four at one point, while the Eagles maintained around a four- to six-point lead over the final few minutes.

Chelsea, however, clawed its way back to within three points with 5.8 seconds left after Matthew Lanzi hit a quick layup.

Over the final 5.8 seconds, each coach called tremendous plays to give their teams the best chance to win.

Out of a timeout on the ensuing possession, Oak Mountain head coach Chris Love drew up a beautiful inbound pass play that eventually led to Chris Mayweather hitting gone one of two from the free throw line to give the Eagles a 44-40 lead.

Chelsea head coach Nic Baumbaugh answered with a strong play call of his own out of a timeout on the Hornets’ final possession.

With 4.7 seconds left Turner Griffin, the quarterback on the football team, fired a ball to midcourt where it eventually found the hands of Sam Towery streaking up to the right wing.

Towery did his best to try and draw contact as well as hit the 3-pointer to give Chelsea a chance at a 3-point play, but neither happened to preserve a 44-40 win for the Eagles.

Despite the failed opportunity on the final play it was a tremendously drawn up play to give the Hornets a chance by Baumbaugh.

Mayweather led the way for Oak Mountain with his 13 points, while Nelson’s 10 were second on the team.

Helena stretches win streak to nine after rout of Thompson