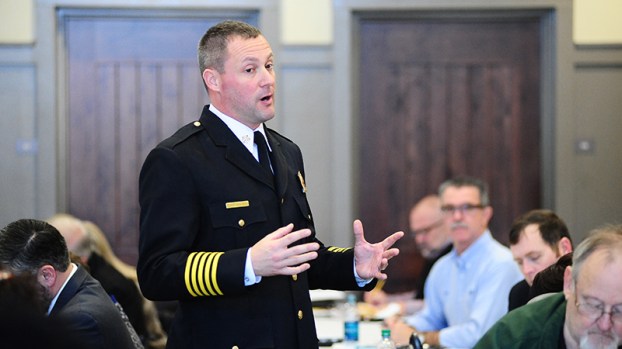 Alabaster Fire Chief Jim Golden offered his resignation from the position during a special-called City Council meeting on Jan. 31. (File)

ALABASTER – Citing a desire to focus on his family and health, Alabaster Fire Chief Jim Golden resigned from the position on Jan. 31 after being placed on paid administrative leave in mid-January, and City Council members said the city is working to quickly begin the process of finding his replacement.

Golden offered his resignation to City Council members during a brief special-called meeting. While his last date will officially be March 5, he is using accrued vacation days until then.

“I’ve got to focus on my health and my family,” Golden said during an interview after the meeting. “The amount of energy that is required for the job to be able to do it in the manner the community deserves, I’m not in a position to be able to commit to that right now.

“I believe in doing things 100 percent, and right now my health and family are my priority, and that is going to consume a lot of my time and energy,” Golden added. “It’s not going to leave me time and energy to serve the city in the manner it deserves.”

Golden had served as the city’s fire chief since he was appointed to the position by the Alabaster City Council in February 2013 on Handlon’s recommendation. Golden replaced former Fire Chief Frank Matherson, who retired on Nov. 1, 2012, and served as interim fire chief after Matherson’s retirement.

Mayor Marty Handlon praised Golden for his service to the city, and said he made many contributions to the department.

“We certainly respect that chief Golden’s priorities need to be his family and his health,” Handlon said while reading a statement during the meeting. “During his tenure, chief Golden has made remarkable contributions to the city of Alabaster and to the fire department. His drive and desire for excellence will be deeply missed by all. We appreciate his dedication to public service and his passion for fire service.”

During his tenure as chief, Golden launched the department’s first efforts to become accredited by the Center for Public Safety Excellence, and held multiple community and in-house meetings to work toward the goal. The department’s accreditation process is still ongoing.

“I can’t reiterate how much of a professional honor it’s been to be a fire chief for a city like Alabaster with such visionary leadership and such a great group of firefighters,” Golden said. “Although its bittersweet to leave that, I’ve got to focus on what’s most important.”

FROM STAFF REPORTS BIRMINGHAM – The 73rd U.S. Women’s Open Championship at Shoal Creek will team up with the Greater... read more