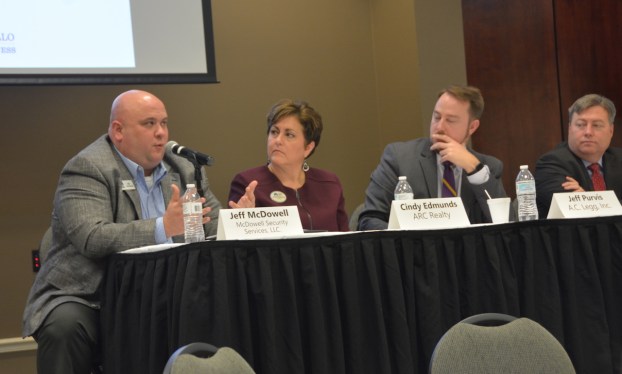 Jeff McDowell, owner of McDowell Security Services LLC, shares insight about what it’s like to be a small business owner in Shelby County. (Reporter photo/Briana Harris)

PELHAM – A panel of Shelby County professionals representing various business sectors of the workforce gathered at the Pelham Civic Complex on Wednesday, Jan. 31, to discuss the outlook of their respective career fields during the third Shelby County Business Outlook Conference.

The conference, co-hosted by the University of Montevallo’s Stephens College of Business and the Greater Shelby County, Montevallo and South Shelby chambers of commerce, featured a panel of six professionals in the fields of banking, real estate, healthcare, retail, manufacturing and small business. Each speaker provided their respective business outlooks for 2018.

Since joining 58 Inc. in November, Murray said she’s been busy building relationships with city leaders and elected officials throughout the county and trying to get a feel for the types of businesses they’d like to bring to their respective communities.

Murray, who represented the retail and economic development sector, added that the future looks bright in Shelby County when it comes to retail development. She said there are some projects in the works that would greatly enhance the county, but she did not provide more detail because no deals have been finalized.

However, she said that the county is lacking in workforce development. Murray said there’s not enough people to fill skilled labor jobs in the county. Purvis echoed Murray’s statement, saying that more employees with specialized skills are needed at A.C. Legg, which manufactures food seasonings.

Purvis, who represented the manufacturing sector, said the sector is cautiously optimistic. He said tax cuts will be good for businesses and hopefully that will allow business owners to reinvest that money back into their businesses.

McDowell shared data stating that more than 50 percent of the working population, 120 million individuals, works in a small business. Although small businesses have a significant impact on the economy, he said they continue to struggle to gain access to capital from banks.

Hall said the field of healthcare is ever-changing. Right now, there seems to be a movement toward improving the quality of healthcare services provided and making services more accessible.

Hall said some physicians are starting to expand their hours to accommodate more people and are allowing to virtual doctor’s visits, which allows patients to consult with doctors by phone, text messaging or video conference.

He added that more doctors are opting for employment instead of going into private practice. More and more doctors are choosing to lease with a hospital to have the backing of a large company, Hall said.

In banking, Dennis said smart phones have changed the way people bank. He said banks are challenged with finding new ways to provide quick access to services. He also said training employees and keeping their skills current is a priority.

According to Dennis, Regions Bank offers external and internal opportunities for employees to enhance their skillset.

“When we do it right, we retain employees and grow leaders,” he said.

Edmunds said the county’s housing market is in good shape. The county averaged 372 homes sold per month in 2017. As of Jan. 31, Edmunds said there were 1,341 Shelby County houses on the market.

Despite the challenges each sector is facing, all the panelists agreed that overall Shelby County’s economy is in a good place right now. There will always be challenges to face, but the panelists expressed their gratitude to the chambers for being a source of support for them.

PCS gets graded by state board of education

PELHAM – Pelham City Schools, along with other public school systems in the state, received its letter grade on Thursday,... read more