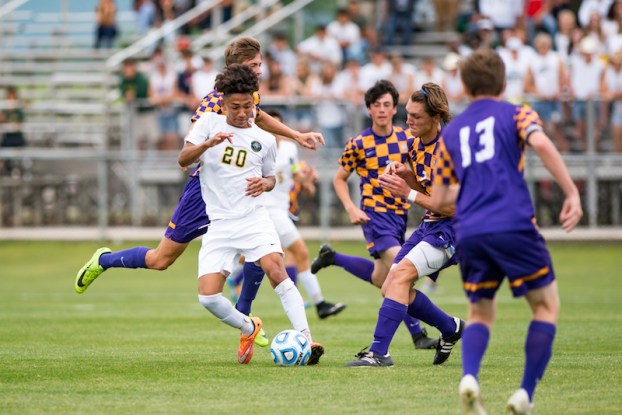 Pelham's Irvin Rodriguez, pictured above with the ball, will be one of the top returning players in Shelby County this season as he looks to lead Pelham to a repeat as 6A state champions. (File)

Pelham looking to repeat despite loss of seniors

PELHAM – The talent had been there and the team had come so close, but in the spring of 2017, the Pelham boys’ soccer team finally hit the apex of success by picking up its first state championship in school history.

That group featured a group of nine special seniors, five of which were on last year’s All-County soccer team, as the group went out on top after spending four seasons on the pitch together.

All of those guys are now gone, including Seth Torman who was an All-County and All-State goalkeeper the last two seasons.

“It’s hard enough to win All-State, but to get it back to back years just doesn’t happen,” head coach Patrick McDonald said. “Replacing that kind of talent in the goal is daunting, but we feel really good about the three guys we have ready to step up this year.”

Goalkeeper is immediately where McDonald started when he began talking about this year’s squad, saying he feels really good about the three guys that will be in goal and if they had three games next week they would all three play.

David Clinton, Jaylen Cook and Chase Denson are the three guys McDonald is referring to and each one brings something different to the table. Clinton is a more technical keeper, Cook is the more athletic keeper and Denson is the senior with the most experience and size.

“We’re excited,” McDonald said of all three’s different styles. “While there is no replacing Seth Torman, we have three keepers and I can trust all three of them.”

While McDonald had a lot of praise for Torman and his goalkeepers upcoming this year, he noted that the back line has been so good that it’s made the keepers’ job a whole lot easier, and that will be the case again this year.

Gregory Blue and William Hilliard will be two of the more important guys back this year to anchor the back line, while Daniel Roman and Jonathan Vazquez will also add some assistance there.

“I have no doubt it will be one of the best back lines in the state this year,” McDonald said. “They’ll really help keep us in a lot of games this year.”

Moving over to the attacking side of the ball, McDonald said they are still trying to find an identity.

“We’re having to look at different formations and having to play a little smaller and quicker than we did last year,” he said. “How we attack teams will look a little bit different than it did last season.”

While he did say they were still searching for who they were going to be offensively, he also said a lot of reserves have looked good in first two weeks.

That’s when he finally got to possibly the best returning soccer player in the county, Irvin Rodriguez.

“He is our best player and I would put him against anybody in the state because of his soccer IQ and athletic prowess,” McDonald said. “He had two seniors helping him in the midfield last year, but he’s going to be the guy this year.”

Last season he totaled 15 goals and 13 assists as a sophomore, but McDonald said it’s more than just his goal total that is impressive.

“He may not always score, but the ball will go through him,” McDonald said. “Big plays last year were because he found the open guy thanks to the defense being worried about him.”

Aside from Rodriguez, McDonald said there are still some opportunities for guys to step up and that there identity is still unknown.

He said they will be in plenty of close games with matchups against Florence, Cullman and others on the schedule outside of an improving Chelsea team and an unknown Helena team in area play, but he expects his defensive back line to help this team be able to play more aggressively than in years past.

The Panthers will open the season on Feb. 12 against Pell City before taking part in the Lakeshore Shootout that next weekend where they’ll compete against Prattville, Oxford and Oak Mountain.

By ALEC ETHEREDGE | Sports Editor CHELSEA – The Chelsea Hornets went from a 12-win team in 2016 to a... read more