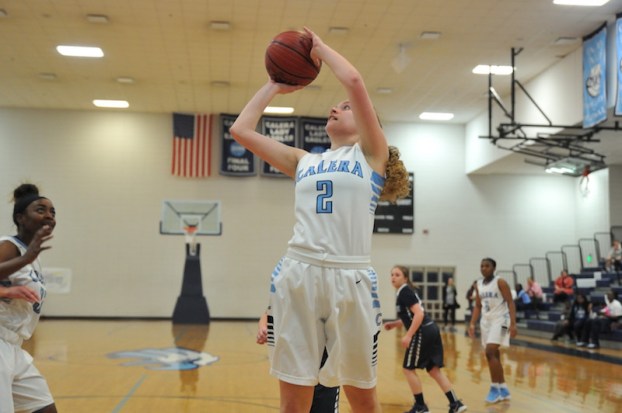 The Calera girls' basketball team won the area tournament on Friday, Feb. 9, with a hard-fought victory over Marbury. (For the Reporter/Larry Dancy)

CALERA – Calera High School’s girls basketball team grabbed a big lead early and held on despite some tough circumstances to capture the Class 5A Area 6 championship over the Marbury Bulldogs by a final of 68-56.

Eagles’ head coach James Knowles wanted to be aggressive from the beginning and his team’s full court pressure stifled Marbury as the defense quickly led to offense the other end.

“The strategy going in was basically to put pressure on them,” Knowles said. “We wanted to make them make mistakes because I thought that if we had enough opportunities we could score off the bounce and that was what we were aiming for to start with and did a good job.”

The teams traded baskets in the opening minutes as both looked to press afterwards, but, unlike Calera, Marbury was unable to score off of the Eagles’ turnovers.

Calera scored 11 points off of 20 Bulldog turnovers in the first half and 12 offensive rebounds racing out to a 23-7 advantage after one quarter.

The second quarter saw a much more even contest as the Eagles’ attacking style put them in foul trouble and Marbury in the bonus. The Eagles also lost starter Tylana Wimberly to a broken finger in the first half and Marbury headed into halftime on an 8-1 run.

The free throws got the Bulldogs’ rhythm back and, most importantly, put team leader Tay Cannon back in her zone. Cannon went on to outscore her entire first half total in the third quarter alone scoring eight of Marbury’s 13 points.

She went on to record a game-high 30 points and a spot on the Area All-Tournament team.

MHS made it a two possession game four different times after halftime, but Calera countered as Kali High came off the bench and got hot in the second half scoring 14 after just one basket in the first half.

With a slim 42-37 lead in the fourth quarter High scored eight of the Eagles’ next 10 points to put CHS up 15 including a gutsy four-point play in which she scored after rebounding her own missed free throw on a traditional three-point play.

High’s play also got fellow teammate A.B. Davis going who scored 14 of her team-high 19 points down the stretch and secured Area Tournament MVP.

“Kali’s one of the hardest working girls that we have,” Knowles said. “She’s just a 10th grader, but she comes to practice every day wanting to get better and if you have a team full of Kali’s you’re going to be pretty successful.”

As the clock ticked inside a minute to play with the game out of reach another scary moment struck for Calera.

Cannon and High went to the ground fighting for a loose ball causing High to roll awkwardly on her neck. Kali remained on the floor of the gym until paramedics carried her off on a stretcher.

High returned before the end of the boys area championship and appeared to be in good spirits without a neck brace—especially when she was able to accept her All-Tournament Team selection after being absent from the post-game ceremony.

The win runs Calera’s record to 18-12 on the season and they’ll host B.T. Washington in the Sub-Regional round Monday night, Feb. 12.

By ALEC ETHEREDGE | Sports Editor  HOOVER – After a perfect regular season in area play and a win in... read more