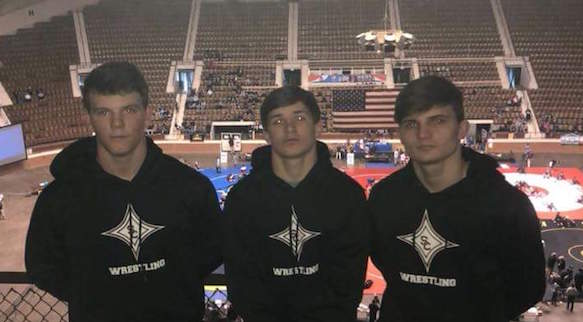 From left, Dalton Brooks, Nevada Wages and Austin Dunn pose at the South Super Sectionals. All three were able to qualify for the state meet to be held later this week. (Contributed)

Wildcats have 3 wrestlers headed to state

BIRMINGHAM – Three Shelby County High School wrestlers were able to earn a spot at the AHSAA Wrestling State Championships after finishing in the top eight of their respective weight class in the South Super Sectional held at the Montgomery’s Garrett Coliseum Friday and Saturday, Feb. 9-10.

Dalton Brooks, Nevada Wages and Austin Dunn all earned a spot inside the top eight of their weight class to pick up that spot in the state championships, which will take place in Huntsville Feb. 15-17.

Brooks and Wages both finished in third in their respective weight classes, while Dunn took third in his.

Wrestling in the 195-pound division, Brooks used a bye in his first match to advance to the second round where he met Holtville’s Carson Hayes.

Brooks was able to pick up a pin to take down Hayes and advance to the quarterfinals of the weight class.

In the quarters, Brooks met Ranburne’s Carson Hall and carried the momentum from the first matchup over to the second matchup of the day as he grabbed a second consecutive pin to advance to the semifinal match.

Had he won his semifinal match, Brooks would have locked up a spot at state, but his luck ran out as Cleburne County’s Christian Seale pinned him.

The loss sent Brooks to the consolation semifinals where a win would have sent him to state and a loss would have ended his season.

Brooks was able to step up in the clutch to not only win that match with a pin, but also win the third place match with a pin to cement his spot in the state championships. He picked up pins in four of the five matches he competed in.

Wages, competing in the 160-pound weight class, grabbed his spot in the state championships in similar fashion to Brooks.

In the first round, Wages was able to pick up a pin over Christian Howard of the Leeds Greenwave, which placed him in the quarterfinals.

Wages picked up another win in the quarterfinals by taking down Springville’s Taylor Cheeley with a technical fall, which sent him into the semifinals.

Like Brooks, Wages’ luck ran out in the semis as Satsuma’s Jeffery Trawick pinned him to send him into the consolation semis.

Wages got back to his winning ways with a pin over Ranburne’s Damon Calhoun in the consolation match and then picked up an easy major decision win over Jason Higgins to bring home third place and clinch a berth at state.

Dunn’s path was a lot more complicated after falling early in the super sectional.

After winning his opening match against Springville’s Jase Chandler with a pin, Dunn lost his second match by way of pin against Walter Wellborn’s Brock Thrash.

Dunn then went on to reel off four consecutive matches before losing in the consolation semifinals and the fifth-place match, which gave him a finish of sixth at sectionals.

By ALEC ETHEREDGE | Sports Editor CALERA – It was all Calera on Monday night, Feb. 12, as the Eagles... read more