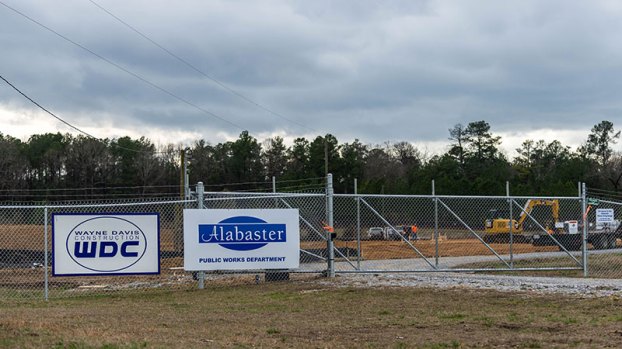 Crews work on the foundation of the new Alabaster public works building in Limestone Park in February. The facility will be completed in the coming months. (File)

ALABASTER – The city took the next step toward finalizing construction of its new public works facility in Limestone Park, as City Council members voted to fund the installation of a pump station to serve the facility and possible future upgrades for the park.

The council voted unanimously during its Feb. 12 meeting to accept a $29,115 bid from the Pump and Process Equipment company to install the pump station at the park off U.S. 31 in southern Alabaster.

The pump station will serve the new public works facility, which is being constructed between the park’s central lake and the Alabaster Police Department’s shooting range to house the city’s garbage trucks.

Alabaster Mayor Marty Handlon said the pump station also will allow the city to one day install restroom facilities at the park, which also houses wildlife-friendly wetlands and a remote control plane strip.

In August 2017, council members voted to award a $1.25 million bid to Wayne Davis to construct the public works facility at Limestone Park between the park’s central lake and the Alabaster Police Department shooting range.

Once completed this spring, the Limestone facility will play a major role in Alabaster’s city-run garbage service, which began in January.

Alabaster has approved a bid from the Pump and Process Equipment company to install a pump station at Limestone Park. (Contributed)