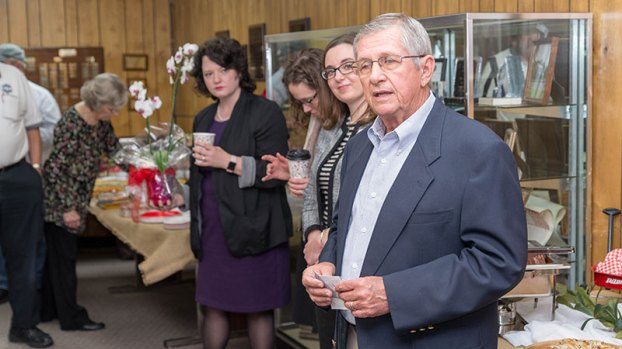 Vincent Mayor Ray McAllister, left, gives an update on the city during a Feb. 15 Coffee with the Mayor event at Vincent Town Hall. (Reporter Photo/Neal Wagner)

VINCENT – The city of Vincent saw some much-needed public safety and park upgrades over the last year, the city’s mayor told a standing-room-only crowd at Town Hall on the morning of Feb. 15.

Mayor Ray McAllister gave a brief update on the state of the city during the South Shelby County Chamber of Commerce’s “Coffee with the Mayor” event, which drew dozens of locals to network over breakfast.

McAllister said Vincent had “a pretty good year” in 2017, and saw a few long-awaited updates.

With some labor help from the county, Vincent was able to update its aging restroom facilities at the city’s park, which McAllister said has been well-received in the community.

“They’re really nice, and that’s something we really needed,” McAllister told the crowd.

On the public safety front, the city also was able to acquire two new police cruisers recently to replace some old, and sometimes unreliable, vehicles.

“Now, our officers don’t have to worry about their cars breaking down while they’re out on patrol,” McAllister said.

McAllister also touted Shelby County, and said the mayors in the county have a strong relationship with each other, and are all working to better the area.

“Shelby County is one of the most fortunate counties I know of, as far as the camaraderie between mayors,” McAllister said. “We are blessed to have the type of people we have here.”

“We wish you the very best. You are taking on a big job, and we know you can do it,” McAllister told Stone.