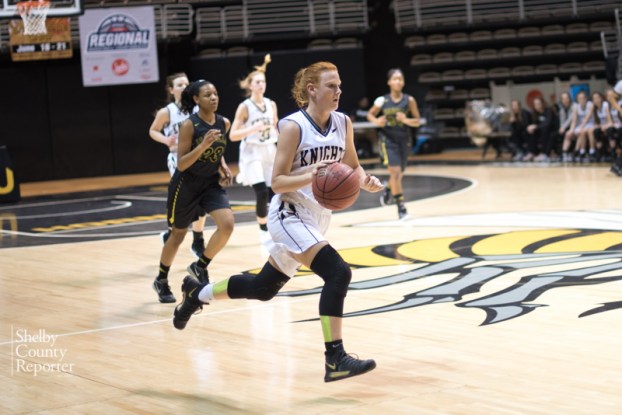 Westminster at Oak Mountain defeated Isabella 55-23 in the Sweet 16 on Thursday, Feb. 15 to advance to the Elite Eight. (Reporter Photo/Keith McCoy)

MONTGOMERY–The Westminster at Oak Mountain girls’ basketball team is one step closer to getting back to the Final Four for the second straight season after cruising to a 55-23 win against Isabella in the Sweet 16 at the Dunn-Oliver Acadome in Montgomery on Thursday, Feb. 15.

It was all Lady Knights from the start as they scored in double-figures in all but one quarter while holding Isabella to just 21.1 percent shooting from the field and caused 17 turnovers.

Morgan White and Rachel Price led the way for Westminster scoring 10 points each while Macy Mixon and Tori Deen each chipped in eight points.

With the win, the Lady Knights advance to the Elite Eight for the second straight season and keep their dream of reaching the Final Four and beyond alive.

Westminster at Oak Mountain head coach Dana Gache is happy to be moving on and her team understands it shouldn’t be taken lightly.

“Getting back to the Elite Eight is something even at the end of last year we said you can’t take that for granted that you’ll get back because it’s so competitive,” Gache said. “The girls have had in their mind all year that we have to earn each step and I feel like they really progressed through the season well and I’m super proud of them.”

Defensively, Westminster held Isabella top scorer Synia Chattman to just eight points on 3-of-11 shooting from the field. At the other end of the floor, the Lady Knights finished with 13 assists compared to just 10 turnovers in the win.

“I thought we were really patient on the press and kept our turnovers low,” Gache said. “We rotated the ball around and got a lot of looks for different girls on offense. Defensively, No. 23 for them averages 22-24 points per game so we were really focused on making sure that we had tight defense on her. I think we held her pretty low on her average so it felt like we had a good game plan and when it came down to execution we executed.”

Westminster will move on to face Loachapoka in the Elite Eight on Wednesday, Feb. 21 at 12:30 p.m. at the Dunn-Oliver Acadome in Montgomery.