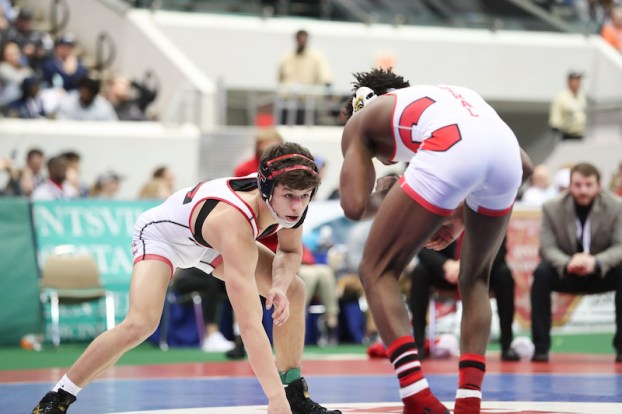 Thompson was able to pick up its sixth state championship in the last eight years by bringing home the 2018 title ahead of Central-Phenix City and Oak Mountain. (For the Reporter/Dawn Harrison)

HUNTSVILLE – After a two-year hiatus, the Thompson Warriors’ wrestling program was back on top of the sport after picking up their sixth state championship in the last eight years on Saturday, Feb. 17, at Huntsville’s Von Braun Center.

The Warriors, who looked like the dominant dynast that won five consecutive state championships all season, capped off their title run with a momentous run in the state championship as the scored a total of 120 points from their 11 wrestlers.

Dylan Lesueur, Emmanuel Oliver, Chandler Akins, Gabe Hixenbaugh and Seth Whitlock were all key contributors in the state championship as all of those wrestlers finished in the top two of their respective weight classes.

Four of those five finished first to gather at least 20 points for the team, while Oliver took home second in the 113-pound weight division.

Oliver’s path included a pin in the quarterfinals, a technical win in the semifinals and a 5-2 decision loss in a tightly contested championship match against Grissom’s Tyler Ivey.

Thompson’s individual state champions piled up throughout the state tournament and it started in the 106-pound division with Lesueur.

Lesueur was able to pick up a pin in the quarterfinals and a technical fall in the semifinals to advance to the state championship. He was able to edge out Central-Phenix City’s Adrian Neco in a thrilling 1-0 decision to pick up the title.

Akins was able to dominate his first two matches with pins against Buckhorn’s Stoney Childers and Bob Jones’ Zaevian Toney. In the championship match of the 126-pound weight class he was in a tougher battle, but came out on top with a 3-0 decision win.

Hixenbaugh, wrestling in the 132-pound division, had three matches similar to Lesueur’s.

In the quarterfinal match he picked up a technical fall win, before pinning Grissom’s Cade Kelly to advance to the championship.

Hixenbaugh found himself in a battle in the title match, but went on to win a 3-2 decision over Central-Phenix City to clinch his individual championship.

Those three wins, and more specifically the two tightly contested wins from Lesueur and Hixenbaugh, became key in the overall team standings as they gave Thompson 64 points.

Seth Whitlock, wrestling in the 285-pound weight class, was the final state champion to add to that total as he won three odd matches in a row that seemingly shocked himself as well.

In the quarterfinal round, Whitlock picked up a 3-1 sudden victory win over Auburn’s Dimitri Anderson in clutch fashion. The stress of tightly contested matches for Whitlock continued in the semifinals as he was able to pick up another close win with a 3-2 decision victory.

The championship match against Lee-Montgomery’s Camron Hill was possibly the most interesting of the three, however.

In a good match, Hill eventually technical fouled himself into a disqualification, but Whitlock had no clue what was happening or why he had won.

A shocked look of confusion quickly turned to celebration, however, as he realized he had just won a state championship individually, and his team had also won the overall title as well.

Several of Thompson’s impressive wrestlers will be back next year, as they look to build off of this season’s win to let it spark another run of state championships like what they saw from 2011-2016. But for now, the Thompson Warriors are the 2018 AHSAA Wrestling State Champions.