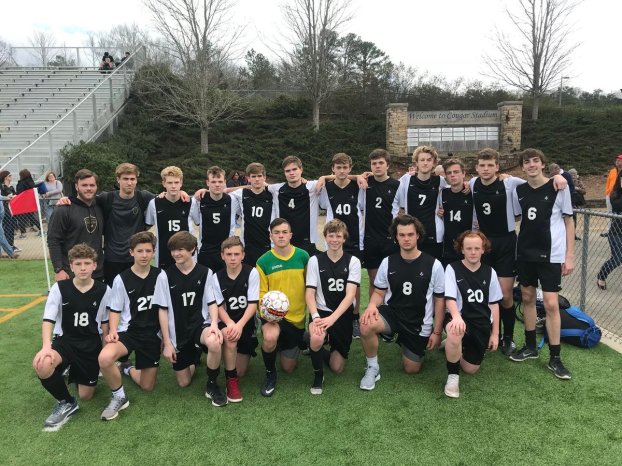 The Westminster Knights' boys soccer team poses for a picture after winning the silver division of the 2018 Lakeshore Shootout. (Contributed)

The 2018 soccer season is officially under way as a total of seven different teams from Shelby County competed in the Lakeshore Shootout from Feb. 16-17 hoping to kick-start a championship season.

The tournament featured four different divisions, a platinum division, a gold division, a silver division and a bronze division.

Out of those seven teams, the only one to win their respective division were the Knights, who claimed the silver-division crown.

Westminster used a 1-0 win over Hazel Green, a 3-0 win over Calera and a 6-1 win over Gardendale to win the championship.

That gave the Knights 27 points, which was enough to narrowly squeak by Montgomery Academy, who ended with 26 points.

Indian Springs was also not too far behind those two teams with 21 total points after picking up a 2-0 win over Calera and a 5-0 win over Gardendale before losing on the final day to Hazel Green by a final of 4-2.

With 19 points through the first two games of the tournament, an Indian Springs victory against Hazel Green would have likely given them the championship.

In the platinum division, Oak Mountain finished in third with 16 points, while Pelham finished fourth with 15 points.

In a tightly contested division, the two teams combined for just one loss and finished narrowly behind Hoover’s total score of 23 points and Prattville’s 17 points.

Oak Mountain went 1-0-2 in the tournament with a 1-0 win over Prattville to start, before ending with two straight ties against Hoover (1-1) and Pelham (0-0).

The Chelsea Hornets came the closes to being the second team to win a division championship as they finished second in the gold division with 24 points, which was just one point behind Pell City’s 25.

Chelsea started out strong with a 3-0 win over Gadsden City and a 4-1 win over Oneonta, but ended up tying with Pinson Valley 2-2 on the final day of the tournament, when a win would have given them the gold-division title.

Helena also competed in the division and beat Pinson Valley and Gadsden City 1-0, but lost 3-1 to Pell City.