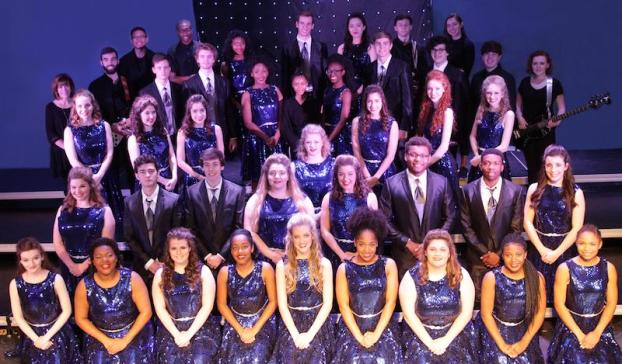 The ChHS "Out of the Blue" show choir is preparing to compete at the Heart of America competition in Nashville on Feb. 24. (Contributed)

CHELSEA – The Chelsea High School competitive show choir, “Out of the Blue,” is preparing to perform in its first national competition, the Heart of America, at the Gaylord Opryland Hotel in Nashville on Saturday, Feb. 24.

According to a press release from the ChHS choir department, “Out of the Blue” is in its second year of competition, and has received several top placement awards. Within the past year, they have placed as first runner up in multiple competitions in Alabama and Mississippi, received Best Energy and Best Female Performer and tied for the title of Best Choreography.

“OOTB has been recognized as one of the premier break-out groups,” the press release read.

Because “Out of the Blue” performs the Elvis Presley’s, “Devil in Disguise,” they were asked by the Country Music Hall of Fame to record a cover of the song at the historic RCA Studio B, where it was originally recorded.

“The show choir’s members have even been given the opportunity to use some of the original instruments that were used in that record,” the press release read.

“Out of the Blue” is directed by Kay Dick. Choreography and show design is done by television actor Dallas Pritt, Isaiah Ruyf serves as choreography associate, musical arrangements were done by Nick Brockamp, the show band is directed by Melodie Dean and Landon Jones and Teal Dick and Billy Mitchell.

“‘Out of the Blue’ has quite the artistic staff and team to be successful,” the press release read.

Classmates, friends, family members and other members of the community are encouraged to meet at the back of the school building at 1:30 p.m. on Sunday, Feb. 25 to greet show choir members as the arrive home.

“Join friends and family by wearing your Chelsea pride spirit-wear, cheering on the group as they exit the bus after representing the community and the state of Alabama,” the press release read.