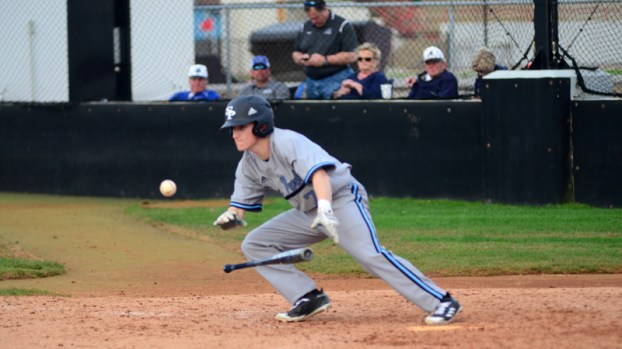 Spain Park’s Lane Willis drops down a bunt and beats out the throw to first base for a hit during a season-opening loss to Auburn High School on Feb. 19. (REPORTER PHOTO/STEPHEN DAWKINS)

In the nightcap of the three-game, round-robin event, SPHS scored in all but one inning and poured it on late, plating six runs in the seventh inning.

Kennington, the starter, allowed three hits and struck out five in five innings of work.

Dozier gave up two unearned runs on two hits and struck out one.

Lane Willis and Dozier each had a three-hit game for the Jaguars, and Brody Richey took three walks. Two of Dozier’s hits were doubles.

Willis, Richey and Matthew Robbins each scored two runs for the Jags, while Colton Ledbetter and Matthew Moser drove in two runs apiece.

In the season’s first game, the Jags could manage only five hits as Auburn took a commanding 5-0 lead in the top of the first inning and was never threatened.

No Spain Park player recorded more than one hit against a combination of five Auburn pitchers, but John Kennington and Jarrod Kennington each doubled, with the latter driving in both of the Jaguars’ runs.

Blackmon and Robbins scored the runs for Spain Park.

Tyler Greer suffered the loss on the mound for Spain Park, with both Dylan Best and Noah Burns coming on in relief but similarly struggling to retire the Auburn batters.

The pitching staff also had to overcome five errors committed in the field.