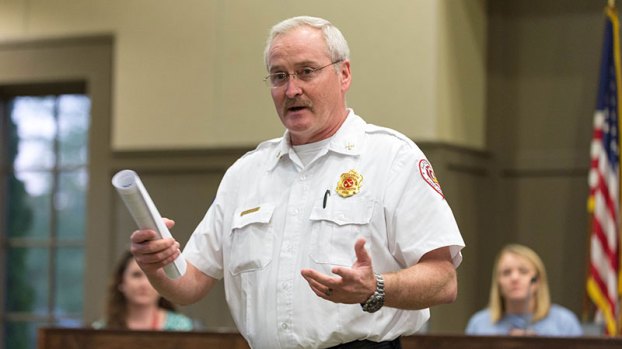 Former Alabaster Fire Department Capt. Tim Love will serve as the department's new chief, after he was approved by the City Council during a Feb. 26 meeting. (File)

ALABASTER – A longtime firefighter with experience at several different agencies – Including the Alabaster Fire Department – will lead the AFD, after he was hired as the city’s fire chief during a Feb. 26 City Council meeting.

Council members voted unanimously during the meeting to hire Timothy Love as the city’s new fire chief. The move came about a month after former AFD Chief Jim Golden resigned from his position, citing a desire to focus on his family and health.

Since Golden used accrued vacation days at the end of his tenure, Love’s first day leading the department will be on March 5.

“I’m very excited about it, and I’m really looking forward to it,” Love said during an interview after the council meeting. “It’s not often that you are able to have an opportunity to come back and lead an agency that you’re so familiar with.”

Love will earn $108,000 per year as the fire chief, and the council agreed to reinstate 17 days of sick time he earned when he worked with AFD previously.

Love is no stranger to AFD or its firefighters, as he served as the training officer for the department from January 2016 through November of last year before moving on to take the section chief of training position with the Alabama Fire College. Love also operates the Custom Fire Service Training business, which provides training to municipal fire departments.

Love has a lengthy history working with area fire departments, as he began his career working as a volunteer at the Concord Fire District in November 1982. While there, he worked his way up to the fire chief position before moving on in 2002.

“His years of experience really set him apart. He has many years of experience in the fire service at many different levels,” said Alabaster Mayor Marty Handlon. “He has a lot of on-the-job training during critical times. Anything Alabaster is going to experience is something he will be able to handle. We’re a young department, and he will provide structure and wisdom for them.”