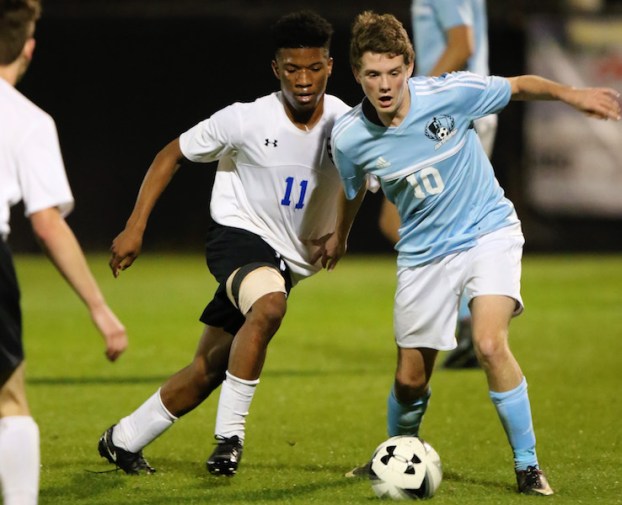 Chelsea's boys soccer team was able to win a thrilling 3-2 overtime game against Helena, while the girls won 8-0 over the Huskies as both moved to 1-0 in area play. (For the Reporter/Cari Dean)

Both Chelsea soccer teams are playing well early in the 2018 season, but on Tuesday, March 6, the Hornets faced a different challenge as the boys and girls both took on the Helena Huskies in their first area games of the season.

For the girls, it was a relatively easy 8-0 victory, but for the boys, it was a challenging nail biter that went into overtime.

With soccer being different than most other high school sports when it comes to area play due to the fact that the top two teams from the area at the end of the regular season advance to the playoffs without an area tournament, a greater emphasis is placed on the regular season games.

It showed on Tuesday night, as the two area rivals fought for victory in a knock-down, drag-out type of game.

The action started early as both teams scored their first goal in the first within the opening 20 minutes.

Chelsea struck first less than five minutes into the game thanks to one of their best players finding the back of the net. Off a feed from Seth Steele, Lando Nichols was able to find the net for the first goal of the game, which gave the Hornets an early 1-0 lead.

After close to 20 minutes of quiet play from Helena, the Huskies finally woke up.

An upper 90 goal 17 minutes into the game gave Helena its first goal of the game to tie the game at 1-1 midway through the first period.

It took just five more minutes for the Huskies to add their second goal as they took advantage of a free-kick opportunity to take a 2-1 advantage. Helena used those two unanswered goals to all of a sudden steal the lead away at the half.

Early in the second half it was obvious some energy was sparked during the halftime break because the Hornets came out and put together several threats in the first 12 minutes of the period.

None of those three opportunities were able to end in goals despite all being extremely close, but that changed 13:34 into the half.

Tony Nettuno was able to pick a ball cleanly off the grass with his left foot from long range that eventually bent perfectly into the goal for the equalizer. His goal with 26:26 remaining in the game had all of a sudden tied things midway through the second half.

In the final 25 minutes there were some tense moments in front of each goal as both teams had strong chances just miss, but neither was able to put the go-ahead goal into the net, which led to overtime.

After a few minutes had passed in overtime, neither team had really gotten an advantage until a corner opportunity for the Hornets.

Steele booted the corner into play where Nettuno won the battle for the ball to keep it in front of the goal.

Nettuno directed his header from the corner kick directly to the goal where Helena’s keeper made an incredible save.

That’s when Andrew Messier was able to find the rebound in a scramble for the ball and burry it into the back of the net for the game-winning overtime goal.

The incredible goal marked Messier’s first goal since 2017 as he helped the Hornets improve to 1-0 in area play.