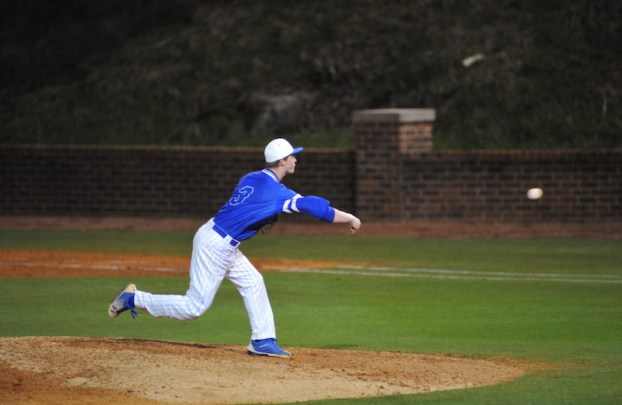 Chelsea’s Brendon Case picked up a no-hitter against Briarwood on Thursday, March 8, thanks to 59 strikes in 89 pitches. He struck out nine batters as the Hornets won 2-0. (For the Reporter/Larry Dancy)

NORTH SHELBY – During the 2017 baseball season, not many people believed in the Chelsea Hornet baseball team outside of their community, but they proved the doubters wrong and made a run to the quarterfinals of the Class 6A playoffs.

In 2018, not many people believe in the Chelsea Hornet baseball team, but with the 23 upperclassmen they have back and the hot start through 10 games, they should start.

It all starts defensively and on the mound. In the Hornets’ first three games of the season, they gave up at least four runs in all three. Since then, Chelsea has locked in on the mound and given up three runs or less in each of its last seven games, including one run or less in five of those seven.

Most recently on Thursday, March 8, Chelsea pitcher Brendon Case was at the center of it all. Case missed the second half of last season with an injury, but has been lights out on the mound early in 2018.

While he came into the matchup with Briarwood sporting a 2-0 record with an ERA of .61, Case’s best performance of the season lied directly in front of him.

On just 86 pitches, the talented pitcher didn’t just throw a complete game to get a 2-0 win over Briarwood, he hurled a no-hitter against one of the state’s best baseball teams.

Coming into the game, Briarwood had scored 58 runs through eight games, which was good enough for an average of 7.3 runs per game.

Case knew his work was cut out for him going into the game, but he was locked into the zone all night and fired 59 strikes in his 89 pitches. The only thing keeping him from a perfect game was one error committed.

Through four innings of play, Briarwood’s Michael Hiers was right there with Case as the talented senior had given up just two hits and no runs to Chelsea’s offense.

With a pitchers dual at the forefront, it seemed as if one or two runs would be more than enough for either team.

In the top of the fifth, the Hornets finally took advantage of that and scored the game’s first run.

Riley Watkins led the inning off with a single to put a runner on with no outs. Reid Burleson came in as a pinch runner and was eventually able to work his way over to second during Bennett Horton’s at bat.

One batter later, Carter Frederick drove a hard-hit ball to center field that allowed Burleson to come around and score to give Chelsea a 1-0 lead.

Hudson Hartsfield was able to reach on an error in the bottom half of the inning, but that was the only base runner the Lions had all night.

The Hornets then added an insurance run in the top of the seventh inning thanks to a line out from Nolan Forehand that allowed Frederick to cross the plate for the 2-0 lead.

Case came back out for his final inning of work in the bottom of the seventh and picked up two groundouts before striking out Hartsfield to close out his no hitter.

Clay DeWeese led Chelsea at the plate going 2-for-3, while Frederick and Forehand had the game’s only RBIs.

Surprisingly enough, the no-hitter by Case was just one of two on the night for a Chelsea team as Brock Hill also tossed a no-hitter in an 8-0 win for Chelsea’s junior varsity team during the same evening as he struck out seven batters.