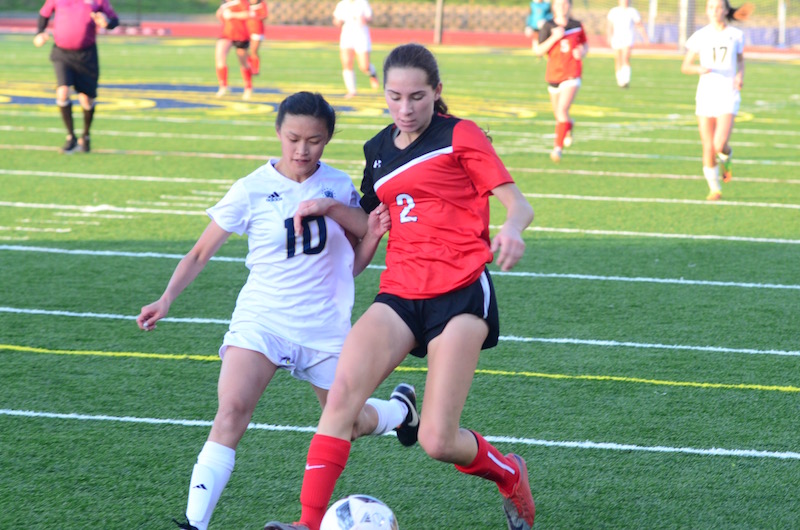 Thompson's Melanie Brannon scored one of the Warriors' two first-half goals in a 2-0 victory over Briarwood. (Reporter photo/Alec Etheredge)

Coming into the game it had been a struggle for both teams despite a load of talent on each roster.

The Lions are trying to replace the Adcock twins, who were dominant the last few seasons, and it led to a 2-5 start to the season. That being said, Briarwood had won two games in a row against Westbrook and a ranked Indian Springs School team by finals of 4-1 and 3-2, respectively to gain some confidence.

The Warriors have been in a similar boat with just one win since Feb. 23 as they came into the game with a 3-5-1 record overall. On Tuesday night, however, Thompson looked much more like the team that was expected to compete for a playoff spot coming into the season.

In a game that was controlled throughout by the Warriors, Poe was able to take advantage of Thompson’s first major opportunity of the game when the team earned a corner kick with 25:15 left to play in the opening period.

The kick from the far right side of the field found its way to the far post where it was bent perfectly right in front of the net. Poe was able to battle multiple defenders to get her head on the ball for the header into the back of the net and a 1-0 lead 15 minutes into the game.

During the next 10 minutes of the game, Thompson was able to get into the Briarwood zone three more times with extremely good opportunities, but never got a shot into the goal.

With the Lions’ offense struggling, the Warriors were taking advantage of their many offensive possessions by attacking.

It led to another corner for Thompson at the 9:27 mark. Again the kick found its way near Poe, but this time a BCS defender was there to head it away.

Finally, the Warriors were able to capitalize on their many opportunities at the 6:48 mark when Brannon broke away up the middle of the field all by herself.

With a Briarwood defender in hot pursuit, Brannon turned on the jets and was able to force the goalkeeper to come out and try to make a play in a one-on-one situation.

Brannon then easily chipped the ball over and into the middle of the net for Thompson’s second goal of the half for the 2-0 lead.

Briarwood got its best look from about 25 yards out with 2:15 left in the opening half, but it ended up sailing by the goal as the Lions went into the break down two.

Early in the second half, the Lions looked much more aggressive and it led to a corner kick just 1:30 into the period. The opportunity didn’t end in a goal, but it gave the team more confidence.

Thompson’s defense, however, was all over the field and intercepting passes the entire game as Briarwood was unable to get many breakaway opportunities that they thrive on.

The Lions ended up with at least four good chances to score a goal in the second half, but great goaltending and defense kept Briarwood off the scoreboard.

Thompson had several chances as well, but couldn’t find the back of the net again as they could have easily won by more and Briarwood could have easily come back had either gotten their second-half chances to go.

The Warriors picked up their fourth win of the season with the victory to move to 4-5-1 overall with area foe Hoover looming on Friday, March 16.

Briarwood is now 2-7 this season, but have plenty of time to turn things around and once they make the playoffs, anything can happen.