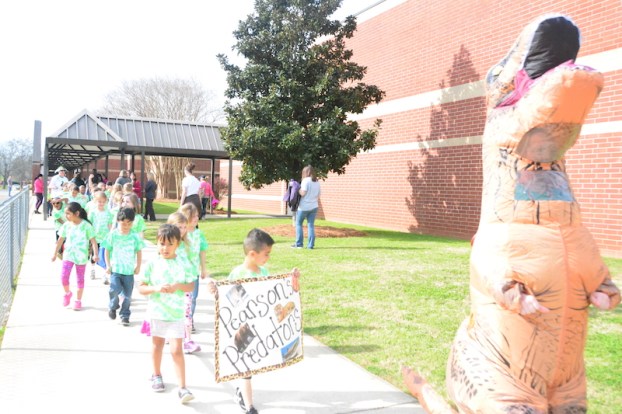 Students from each class at CVES had the option to pick a theme and dress up while participating in the school's annual Fun Run. (Reporter photo/Amalia Kortright)

ALABASTER – Students at Creek View Elementary School got some exercise while raising funds for their classrooms at the school’s annual Fun Run on Friday, March 16.

According to CVES Principal Charissa Cole, money was raised through pledges from the students’ families, and will go toward adding new technology, like Chromebooks and iPads, to classrooms. By 9:30 a.m., Cole said the school was close to completing its goal of raising at least $20,000, and would most likely reach it by the end of the day.

“It gives the kids a sense of ownership by raising money for their school,” said CVES PE teacher Catherine Mohon, who organized the Fun Run with the rest if the school’s Physical Education Department.

Additionally, Mohon said the Fun Run promoted physical fitness. During the event, students did laps in a field outside of the school. Students did different things, including walking, dancing, running and pretending for each lap.

“This was just to make it more fun,” Mohon said.

Each class also picked a different theme for the Fun Run, and dressed up accordingly.  Some students dressed up as animals or movie characters.

“They’ve been thinking about what their themes would be all week,” Coe said.

First grader Anna Kate Waldrip, who dressed like a cow to represent her class, said she ran 10 laps. Anna Kate also said she really enjoyed running around the track while dancing, and especially liked dabbing and doing the “Soulja Boy” dance.

First grader Caleb Smitherman said he enjoyed being with his friends.

“We’re just running track. We’ve been doing this for an hour. I’m getting tired, but I’m having fun,” Caleb said. “It gives you a lot of exercise. You get to run and have fun with your friends.”

Cole said the event also served to get the community involved, and taught students about the importance of good citizenship. She said the Fun Run placed a special emphasis on the phrase, “Be kind.”

“That’s just something that we talk about to our kids all the time,” Cole said.

Cole thanked the PE Department for their work in putting the event together.

“Our PE teachers have done a fabulous job,” Cole said.

In addition to support from CVES family members, Mohon said local businesses also donated gift cards and goods to teachers for the event.

FROM STAFF REPORTS NORTH SHELBY – More than 50 years ago, one musical changed theatre forever. West Side Story is... read more