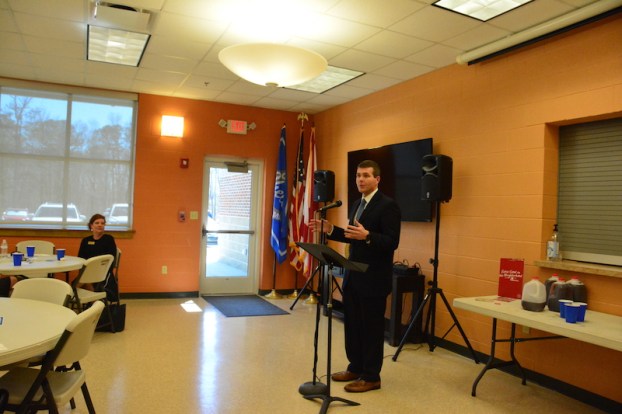 Gubernatorial candidate Walt Maddox addressed some of the issues facing the state of Alabama at a March 14 CBA luncheon. (Reporter photo/Amalia Kortright)

At the meeting, Maddox gave a speech that urged Alabama citizens to put aside party politics to improve the quality of life in the state and invest in the future.

“People in the end, regardless of their political party, want results,” Maddox said. “The next generation of Alabamians deserve better than what we inherited.”

According to Maddox, the state of Alabama is facing a health care crisis. Maddox said Alabama ranks 48th in overall health care, 50th in premature births and 49th in prenatal care. Maddox also noted that the closings of several hospitals in rural areas have contributed to the issue.

“In 54 counties, mostly rural, our life expectancy is six months less than in the other counties,” Maddox said.

“I want to show you that we can be the candidate that can change things,” Maddox said. “No one else is talking about this, and they won’t. What I just outlined to you are very real problems, and I (haven’t) even touched on education.”

Maddox ended his presentation with a question-and answer session. One member began with a question about Maddox’s stance on abortion, and Maddox identified himself as pro-life.

Maddox also re-addressed Alabama’s health care issues, stating that the decline in health care was beginning in rural areas and making its way into more populated cities. He also said that the state is not attracting physicians.

When asked about school safety, Maddox said he will be proposing a new school safety plan in the future and voiced his support for improving the sharing of information among law enforcement agencies and developing a task force for school security. He also said he opposed allowing teachers to carry firearms on school property.

In response to a question about the Alabama Education Lottery, Maddox said 72 percent of Alabama voters agree with instituting a lottery and using it to help fund education. However, Maddox said he does not believe funds from the lottery should replace state funding.

Chelsea Fire Chief Wayne Shirley asked the final question of the session, seeking suggestions for how communities and first responder agencies should handle emergency preparation and recovery. Maddox cited his experiences when a tornado devastated parts of Tuscaloosa in 2011, and also urged communities to undergo courses at FEMA’s Emergency Management Institute in Emmitsburg, Maryland.

“It really prepared us for April 27,” Maddox said.

To close his presentation, Maddox referenced specific lyrics from the Louis Armstrong song, “What a Wonderful World:” “I hear babies crying, I watch them grow. They’ll learn much more than I’ll ever know.”

“I want to leave your children and grandchildren a better future,” Maddox said.