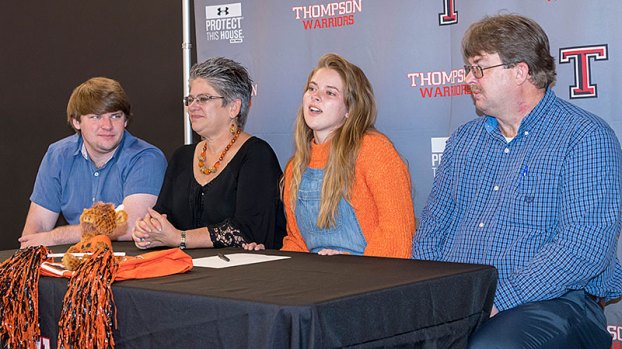 ALABASTER – For years, Thompson High School senior Sarah Owens has been working to achieve her goal of playing at the next level. But she didn’t want to play just anywhere.

“As you know, she set a goal quite a while ago to play in college, and she has dedicated herself to making that a reality,” said THS head girls’ soccer coach Nathan Button. “She wanted to play at a school that fit her needs, both on the field and off the field. She visited around 15 or more colleges, and she played at six different schools’ ID camps before she decided that Milligan was the place to go.”

When her exhaustive search was over, Owens chose Milligan College in Elizabethton, Tennessee, to continue her athletic and academic career.

Owens has been a major part of the success the THS team has seen over the past several years, and will graduate from the school in May as a valedictorian.

“I want to thank my family, especially my parents, for all their support. My teammates for always pushing me, and my coaches and my friends,” Owens said after signing her scholarship during a March 16 ceremony in the THS cafeteria.

Button said Owens’ determination to find the right college will serve as an inspiration for future THS athletes.

“We’re very excited to see someone like Sarah who is so willing to set a goal, but not stop there. Everyone sets goals, but the follow-through is what sets her apart,” Button said. “She was determined that she was going to play in college at a school that she wanted to play at, and she made that happen. Her dedication to that is why we are here today.

“She’s part of the defense that has recorded 20 shutouts. She’s had successes here, and we know she will have success elsewhere,” he added. “As she moves on, I know Milligan too will be part of her successes.”

Pelham takes back Border Trophy in win over Thompson

By SETH HAGAN | For the Reporter PELHAM – The Pelham Panthers took home the Border War trophy on Thursday... read more