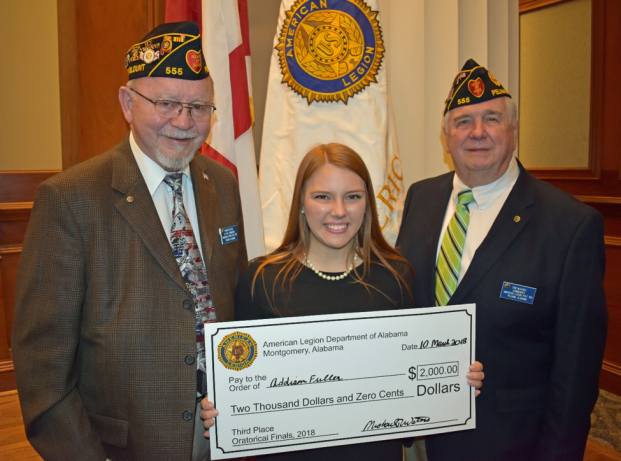 She received a scholarship for $2,000. Fuller, who is the daughter of Bram and Melissa Fuller, previously won competitions at the post, district and division levels. She plans to attend Huntingdon College this fall.

The American Legion Oratorical Contest exists to develop deeper knowledge and appreciation for the U.S. Constitution among high school students. Since 1938, the program has presented participants with an academic speaking challenge that teaches important leadership qualities, the history of our nation’s laws, the ability to think and speak clearly and an understanding of the duties, responsibilities, rights and privileges of American citizenship.

Young orators earn college scholarships by participating in and winning competitions. More than $138,000 in scholarships can be awarded each year. The winner of the national contest receives an $18,000 scholarship. Second place takes home $16,000 and third gets $14,000.

Public school systems, as well as individual private schools, are closing schools on the afternoon of Monday, March 19, in... read more