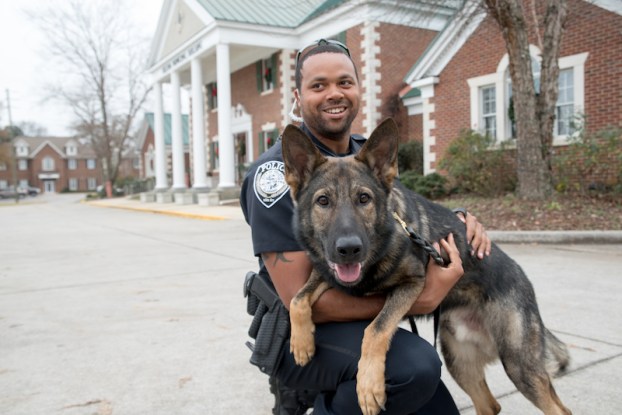 A new service K9 memorial dedicated to previous service dogs in Helena will be unveiled on Sunday, March 25, at 2 p.m. at Cahaba Lily Park. (File)

HELENA–After more than a year of collecting donations, members with the Helena Police Department will soon unveil a new service K9 memorial dedicated to the service dogs that have helped serve and protect the community over the decades.

In November 2016, the Helena Police Department grieved when it suddenly lost its 10-year-old K9 Bak from cancer and reality set in of just how special K9s mean to a community.

After losing Bak, Valerie Richards, daughter of Helena Police Officer Philip Richards who was the handler for Bak, headed up an organization with the help of Helena Police Captain Ivy Penhale to raise money for a K9 memorial.

The hard work paid off as a new service K9 memorial will officially be unveiled on Sunday, March 25, at 2 p.m. at Cahaba Lily Park for all to see.

Anyone is welcome to attend the unveiling as the memorial will serve as a reminder of the previous three diligent duos of K9s and handlers including Hasco and Doug Jones, Victor and Penhale and Bak and Richards.

“This will be a place we can come as a community to reflect and celebrate the lives of our K9s and our family and friends in law enforcement and military,” Valerie said. “To see the entire community, join and participate to make this into a reality is what this monument is all about. We would like to thank every individual who has supported this cause, the many businesses that sponsored, and the city of Helena for coming together to support something so special to all of us.”

Since the passing of Bak in November of 2016, the Helena Police Department has put a new service K9 on duty as Sanczo, a one and a half year old German Shepherd, came to the department at the end of November 2017.