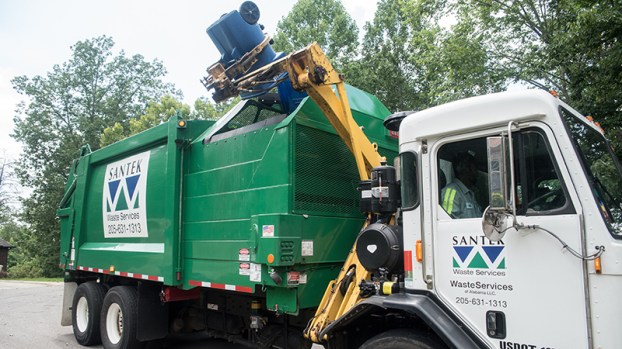 Hoover’s City Council approved a three-year extension of the city’s contract with Santek for trash and recycling service. (FILE)

HOOVER – The Hoover City Council approved for the city to extend its contract with Santek for trash and recycling service for three more years.

The Council voted at its meeting on Monday, March 19, for Mayor Frank Brocato to extend the contract for three more years, to Sept. 30, 2021.

All Council members who voted on the measure were in favor, with Council President Gene Smith abstaining and Councilmen Casey Middlebrooks and Derrick Murphy absent from the meeting, which was held as scheduled after concerns about potential severe weather caused officials to consider postponement.

Smith said he wanted to continue the vote to another meeting because of the absence of Middlebrooks, who Smith said had put in much effort to meet with Santek officials and gather public input.

Greene said the committee under which the measure fell agreed with the extension, and Middlebrooks indicated he also was in favor, so there was no reason to delay the vote.

The contract had been set to expire on Sept. 30.

A decision on the extension was brought up in January but pushed back after the Council heard complaints from residents about Santek’s services.

Sam Dillender, general manager for Santek Waste Services, addressed the council in January, admitting an “uptick” in complaints but assuring city officials that the concerns are being addressed.

“Percentage-wise, that sounds pretty good, but it’s not,” he said. “It’s not where the standard is. We’re better than that.”

Dillender said some complaints are because recycle bins are not emptied by a recycling truck if the bin contains contaminated material, such as food waste.

“The key to us is that Santek is incredibly responsive,” Rice said. “When there have been issues, they’ve scrambled to try to fix them.”

•Heard the first reading of an ordinance that would accept the annexation into the city of 2.3 acres of property owned by Brook Highland Community Church at 7160 Cahaba Valley Road. A second reading of the ordinance and consideration for adoption is scheduled for the April 2 meeting.

•Scheduled a public hearing for 6 p.m. on April 16 to consider, among other measures, conditional use approval from Racetrac Petroleum Inc. for a gas station to be located at 2137 Valleydale Road.