COLUMBIANA–A 22-year-old Florida woman faces a pair of felony drug distribution charges after she allegedly distributed the controlled substances at two separate locations in Helena in 2017. 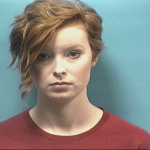 The Shelby County Drug Enforcement Task Force arrested Abby Marguerite Harvison, who lists an address on Itani Way in Jacksonville, Florida on March 12 and charged her with two counts of unlawful distribution of a controlled substance.

According to her arrest warrants, Harvison allegedly distributed amphetamine and dextroamphetamine in the 300 block of Helena Marketplace on April 25, 2017.

She also allegedly distributed amphetamine and dextroamphetamine in the 4000 block of Shelby County 17 on Jan. 12, 2017, according to her arrest warrant.

Unlawful distribution of a controlled substance is a Class B felony, according to Alabama law, and is punishable by up to 20 years in prison per count, if convicted.

Harvison was released from the Shelby County Jail on March 12 after posting bonds totaling $20,000.

She is now set to appear in Shelby County District Court for a preliminary hearing at 8:30 a.m. on April 4.