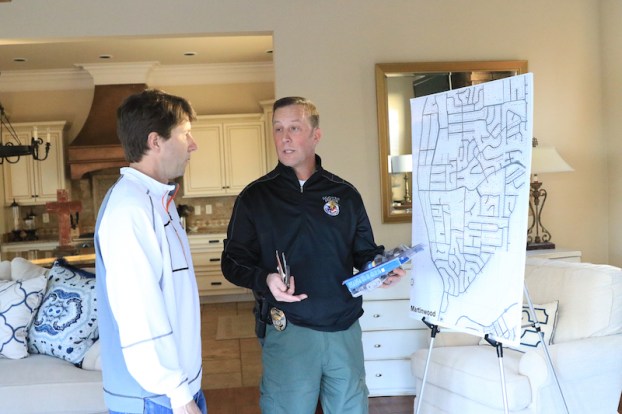 Hoover, Alabama tops the charts as one of the most livable and safest cities. In 2017, 24/7 Wall St.’s index identifying the 50 best American cities to live placed Hoover at No. 17, and it was the only Alabama city on the list. Niche.com ranks Hoover No. 4 in its 2017 Best Places (suburbs). One aspect contributing to the high rankings is Hoover’s low unemployment rate and low crime rate.

The Hoover Police Department credits many things in maintaining the city’s safety, including the relationship between the police department and the citizens of Hoover. For many, neighborhood watch is where that relationship begins.

Officer Brian Hale started with the police department in 2006, as a patrol officer. When he became the Crime Prevention Specialist and Neighborhood Watch Liaison for the Hoover Police Department four years ago, there were less than 10 active watch groups that the department was aware of. Today, the number of active watch groups is hovering around 60 across Hoover, and there are 20 more neighborhoods in the process of forming their own groups. Each one of these groups are in different stages of development.

Hoover is not a high-crime city. Niche.com, a national ranking site, again named Hoover one of the safest cities to live in 2016. But as the saying goes, “An ounce of prevention is worth a pound of cure,” and that is where Hoover’s Neighborhood Watch program comes in.

“The fact is, an active Neighborhood Watch deters criminal activity,” Hale said. How? “Because neighbors who know each other and have a relationship with the local police department are better prepared to spot suspicious behavior, criminal activity – someone or something that doesn’t belong.”

Knowing your neighbors and connecting with the Hoover PD is key to any successful Neighborhood Watch. Watch groups start out with a handful of neighbors. Typically, they start with “line of sight” neighbors and expand from there. The first goal for a newly formed watch is to create a directory of who is in the group. Hale said forming a watch in this way builds relationships with neighbors and they become a living, breathing “community” that improve safety and the quality of life for everyone.

“As they become an official watch, they begin learning different crime prevention techniques from the police department at watch meetings. Individuals are then armed with preventative ways to make their homes more secure, learn what to do when they see something suspicious, and what to do in case of emergencies.”

According to NNW.org, since 1972, the National Neighborhood Watch Program in association with the National Sheriffs Association has worked to unite law enforcement agencies, private organizations and individual citizens in a nation-wide effort to reduce crime and improve local communities. The success of the program has established Neighborhood Watch as the nation’s premier crime prevention and community mobilization program.

As many watch groups organize across Hoover, each group functions in its own way with Hale as the liaison to the Hoover Police Department.

“One of our Watch groups formed out of an absolute tragedy,” Hale said. A few years ago, the Lake Cyrus community had no relationship established with each other nor the police department. That all changed on Jan. 4, 2016. Iraqi War veteran and Lake Cyrus resident Mike Gilotti was leaving his home early that morning and walked out of the house at the exact moment four suspects were breaking into cars on his street, and they were in his driveway. Gilotti turned to go back inside the house when one of the burglars shot him in the back, killing him. After that horrific incident, the Lake Cyrus neighborhood formed their version of a Neighborhood Watch.

“As a community, we were left heartbroken and stunned that something of this magnitude could happen in our neighborhood,” resident Susie Tignor said. “I responded to a Facebook post on the What’s Happening Hoover page expressing our subdivision’s need for more police patrols. Officer Hale also responded, and we began to discuss how the Neighborhood Watch program could help. He encouraged me to spearhead the program, and I agreed to take it on.”

Today, Lake Cyrus’s program has improved the community, Tignor said. “Residents are more aware and look out for not only themselves, but for their neighbors around them. We have a large team of street captains to assist their fellow neighbors and provide them with the information they need to look out for themselves. We encourage residents to join our Homeowner’s Facebook page as it is the easiest way to get the word out regarding safety concerns and tips.”
Like Lake Cyrus, some groups get started as a result of criminal activity, but most Neighborhood Watch groups form simply because people want to know their neighbors and know what is going on around them.

“Ironically, it is more difficult sometimes for groups to form when nothing is going on rather than when there have been some crimes occur in the area,” Hale said. “We often get a false sense of security and feel like ‘nothing ever happens here,’ but by being vigilant, staying informed and having an active watch, citizens and police learn about each other and strive to keep it that way.”

The digital age brings more tools to Neighborhood Watch with the use of email, texts or social media. In Hoover, several areas have created “Closed” or “Secret” groups on Facebook or use the site Nextdoor.com. Some larger areas, like Bluff Park, have smaller, individual watch groups throughout the community. These groups also utilize one community-wide Facebook page called Bluff Park Neighborhood Watch that is run by watch captains from Bluff Park and Hale.

But you don’t have to be social media savvy to have a Neighborhood Watch, Hale said.

Technology is a great tool, but it does not replace getting out and meeting your neighbors. “Not everyone is up-to-date with computers, iPhones or Facebook,” he said. “One of my groups, the Matzek Road Watch in Bluff Park, started when a retired pilot wanted to know what was going on in his neighborhood. In some cases, the only way to meet your neighbors is to put your comfortable shoes on and go door-to-door meeting them.

“So, my future watch captain began his mission of trying to meet all of his neighbors and get them plugged in with each other. Sixty-three homes later, this group had a directory, held their first meeting and are now on their way to being a very active Neighborhood Watch. It’s not always easy, but this group proves that it’s possible.”

Another active watch in Hoover is Sky Ranch off Old Rocky Ridge Road. This smaller subdivision formed its Neighborhood Watch a little over five years ago with Kenn Alan Gann serving as its watch captain.

“The Neighborhood Watch program is an essential part of our community,” Gann said. “Even in gated subdivisions the program promotes safety, security, communication and all-around good neighborliness. Everybody in our neighborhood knows, and has some interaction with, at least one other neighbor now. The best part of having this relationship with the Hoover Police Department is it lets us all know that we have a guardian angel, so to speak. They are there to help us when we need help.”

HOW TO START A NEIGHBORHOOD WATCH WITH HOOVER PD

To get your own Neighborhood Watch group established, Tignor stresses the importance of having a point of contact with Hoover PD. Taking that first step is not hard.

“Get a group of your neighbors together and set up a meeting with Officer Hale,” she said. “Encourage residents to be involved for not only their safety, but the safety of their fellow neighbors.”

Once a group is ready (typically around 20 people depending on the size of the street or neighborhood), they will meet with Hale to discuss forming their watch. A captain and point of contact is established. At a second meeting, Hale pulls calls for service for the newly formed watch to identify any issues, discuss home safety and crime prevention techniques, and review other topics.

“I encourage the group to have one meeting a year so we can discuss current crime trends and talk about police ‘calls for service’ in their area. Doing these simple things each year will add to the safety and quality of life to the people in that neighborhood,” he said. “Instead of not knowing what is going on in your neighborhood, you get information directly from us, the police. You know exactly what is going on. No rumors, no perceptions … the truth. I believe that makes a huge difference in people’s lives.”

Hale said the biggest misconception he hears concerning forming a Neighborhood Watch is that it is difficult and it will take up a lot of your time.

“Nothing could be further from the truth,” he said. “At its core, Neighborhood Watch is a group of people that knows each other and, most importantly, also has a relationship with the police department.”

It is that relationship that makes just a “group of neighbors” a watch. Neighborhood Watch is not only a benefit to the group, but to the police department and the officers protecting the city.

“To begin with, homeowners learn how to better secure their home and property,” Hale said. “We teach them. This helps reduce opportunities for bad guys to commit crimes in any neighborhood. Secondly, we can’t be everywhere all of the time. An active watch acts as the department’s eyes and ears in the community. We depend on them to let us know when something isn’t right. Many folks don’t know what suspicious behavior looks like, but having an active relationship with us allows us to share what we know with them, therefore giving them the tools to keep us informed.”

What Neighborhood Watch is not: “We don’t ask citizens to patrol the area or confront suspicious people; that’s our job,” Hale said. “All we want them to do is know each other, know how to contact one another in case of emergencies and stay connected with the Hoover Police Department for up-to-date information. That’s it.”

Having an active Neighborhood Watch does this. Hoover remains one of the safest cities in the state and in the nation. The relationship between the community and the officers that protect it is vital.