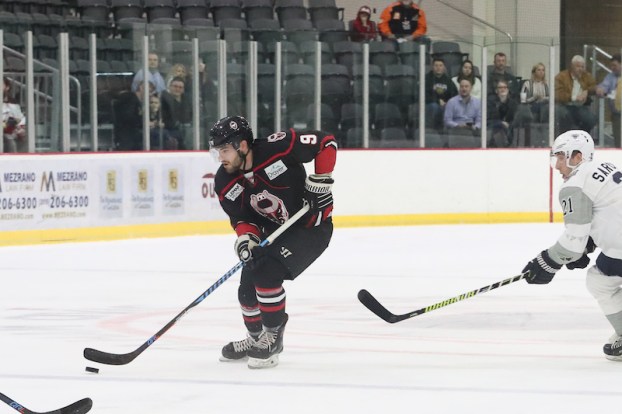 Bulls still “Bullieving” despite 3 losses in a row

The Birmingham Bulls were on a tear with their eyes set on a nothing but a playoff spot after winning six in a row and 13 of 15 games, but that resilient play has hit a rough spot and turned into a three-game losing streak at the wrong time.

While the struggle isn’t what they needed right now, you can’t fault a team that has poured everything they have into winning since the end of January to even have a chance over their last four games to make a push into the playoffs.

Birmingham was the last place team in the SPHL for the first two months of its return, but then turned a page to become one of the league’s hottest teams despite nobody else around the league believing in the team.

But the Bulls’ faithful were more than hopeful, the “Bullieved” as has become the infamous saying around the organization.

The 4-3 loss to Pensacola wasn’t very worrisome, but the 6-3 loss to Knoxville and the 6-2 loss to Huntsville is what is scary as the defense struggled in both.

Against Knoxville, Birmingham fell behind 3-1 at the end of the two periods and 4-1 early in the final period and just couldn’t recover. Charlie Millen, the team’s goalkeeper, has been on fire in recent weeks, but he was only able to save 17 of the 23 shots he faced.

That was the difference, as the Bulls also got 23 shots in the game, but only converted on 20 of those.

The following night, Millen got the start in goal, but gave up two goals in Huntsville’s first five shots, which led to him getting some much-needed rest for the remainder of the game as Ryan Mulder came in to finish the game off.

He ended up allowing four goals in 20 shots, while Huntsville’s Mike DeLaVergne stopped 28 of the 26 shots he saw.

Birmingham fell behind 5-0 at the end of the first period and never recovered, despite two goals in the second period.

The Bulls are now down by three points to both Mississippi and Roanoke (MS), who have 52 points this season.

That doesn’t have the Bulls’ organization, team or fans any less hopeful of what can transpire over the final two weeks of the season.

Both Mississippi and Roanoke have five games left, compared to Birmingham’s four, which gives them one more opportunity to gain two points with a win, but both have difficult schedules.

It’s obviously going to take something special for the Bulls to pull it off as they’ll need to win at least two of their final four games and probably need to win all four, but with the belief of this fan base and team, the magical ending isn’t too far of a stretch.