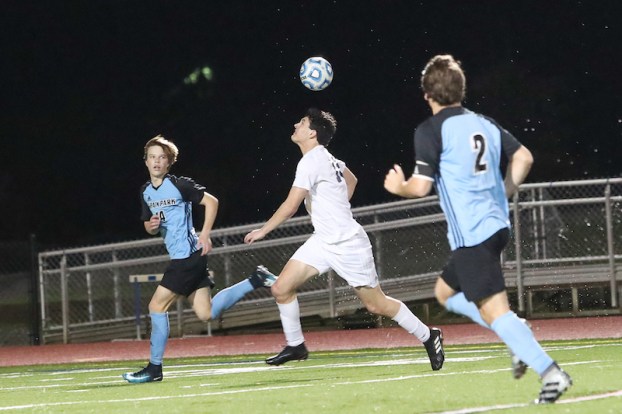 Briarwood was ranked as the highest boys soccer team in the county at No. 1 in the Class 4A-5A standings, while Spain Park was the highest ranked 7A team at No. 7. (For the Reporter/Dawn Harrison)

Local soccer teams in Shelby County have been blossoming all season, but now spring break is here and it’s the time of the year where teams need to be in full bloom as we head into the final month of the regular season.

On Sunday, March 25, the latest boys soccer coaches poll was released and featured a season-high eight teams in the standings to propel those teams into the last leg of the season with confidence.

The highest ranked team out of those eight was Briarwood, who came in at No. 1 in the Class 4A/5A standings after a dominant stretch leading into spring break.

Winners of their last 11 games in a row, the Lions have outscored opponents 63-4 and have pitched eight shutouts in those 11 wins. The closest game in that stretch was a 3-2 win against Spain Park, while they also gave up a goal to Pinson Valley and Cullman in wins of 3-1 and 4-1, respectively.

The next highest ranked team was Westminster at Oak Mountain, who found the No. 2 spot in the 1A-3A standings.

The Knights have lost just one game this season and sit at 12-1 overall, while boasting an area record of 2-0. Westminster’s only loss came on Feb. 21 against the Chelsea Hornets by a final of 3-1.

Since then, the Knights have reeled off nine consecutive wins by a combined 43-6, posting six shutouts in that time span as well.

Just behind them in the 1A-3A standings was Indian Springs at No. 3 in the poll.

Sitting at 10-3-2 overall this year, Springs has won five of its last seven games and eight of its last 11. The team has three two-goal losses this season, falling to Oak Mountain, Altamont School and Hazel Green.

Indian Springs, who is 3-0 in area play, is looking to repeat as state champions in the classification and will be well prepared as they face a difficult schedule during the final month of the season.

Tied for the third highest ranking in the county was Pelham, who found themselves ranked No. 3 in the 6A classification.

At 8-5-3 this season, the Panthers have lost all five of their games by one goal, which shows they could just as easily be undefeated instead of a five-loss team.

Pelham recently had a three-game winning streak snapped by Chelsea in an area upset. The loss put the Panthers at 1-1 in area play and gave the Hornets a leg up for the area championship.

With the top-two teams making the playoffs, Pelham will have some important games against both Chelsea and Helena in April.

While they were outside the top 10, Chelsea’s upset of the Panthers helped them grab a spot in the 6A standings. With it being such a difficult area, the rankings were extended to 16 teams and included Chelsea as the 16th ranked team.

The Hornets are now 8-5-2 overall this season, but more importantly 2-0 in area play. They control their own destiny when it comes to making the playoffs and winning the area championship.

Spain Park, Thompson and Oak Mountain were all found in the Class 7A poll with the Jags being the highest ranked of the three teams at No. 7.

The Warriors and Eagles rounded out the top 10 in ninth and 10th, respectively.

Although the Jags have the same record as Thompson at 7-7-1, Spain Park holds the head-to-head advantage with a win in the Island Cup Championship earlier this season.

The Jags went on to win that tournament and have since won four of five games to end a three-game losing streak, including a 4-3 win over Oak Mountain to improve to 1-1 in area play.

The Eagles are the only team of the three to have a record above .500 at 6-5-5, but they have lost three consecutive games, all by one goal.

Oak Mountain will be in a battle with Spain Park and Mountain Brook during the final month of the season for the two playoff spots in the area.

Thompson is on the wrong end of five straight losses, but the Warriors have played five consecutive top-10 teams.

The Warriors are 0-2 in area play, but will have opportunities against Hoover and Vestavia Hills in the final month.