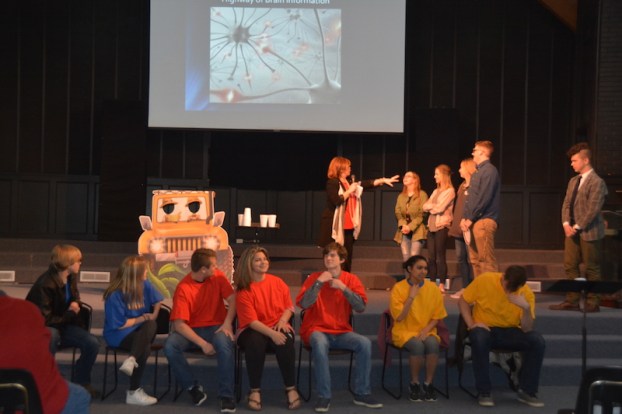 Judge Lara Alvis has KCS students act out scenarios in which they are tempted to drink and drive. (Reporter photo/Amalia Kortright)

ALABASTER – With only a few days before prom, Shelby County Circuit Court Judge Lara Alvis and Shelby County Community Corrections Executive Director Julius Cook spoke to high school students at Kingwood Christian School about the importance of making the right decisions and the dangers of underage drinking and driving while intoxicated at an assembly on Thursday, March 22.

Alvis used visual aids and had students act out roles to demonstrate how alcohol and peer pressure affect the developing teenage brain.

“When adults make their decisions, they’re thinking that you should be thinking like they do,” Alvis said.

According to Alvis, someone in the United States dies as the result of a drunk driving incident once every 45 minutes. While Alvis urged students to abstain from drinking, she encouraged anyone who did to call someone sober for a ride home instead of driving themselves.

“For every class you go to, somebody dies,” Alvis said. “This could all end if we all called somebody.”

Cook shared how, on Sept. 9, 2015, his family’s lives were profoundly affected by one of those incidents. Cook’s parents were driving home from church, where his father served as a pastor, when their vehicle was struck by an intoxicated driver in an 18-wheeler.

“I’ve sat down with families affected by assaults and homicides. They fill out a victim’s statement,” Cook said. “Never in a million years did I think that I would be at the other end of the table.”

Cook said his father was killed as the result of the wreck.

“My dad died right there. Just before impact, he laid across (my mother),” Cook said.

While his mother survived, Cook said she was hospitalized for an extended period of time and suffered through many medical complications.

“There were tons of life-sustaining machines, about $3 million worth of medical equipment,” Cook said. “She was in a coma for a month and a half. She died four times. Four.”

Currently, Cook said the driver is serving a sentence in prison.

“One of the most difficult decisions I’ve ever had to make was to sit across the table from him and say, ‘I forgive you,'” Cook said.

Alvis said killing or hurting victims while driving under the influence is different than other crimes, because the offender never intends for that to happen.

“You don’t get to choose a victim that you intend to hurt,” Alvis said.