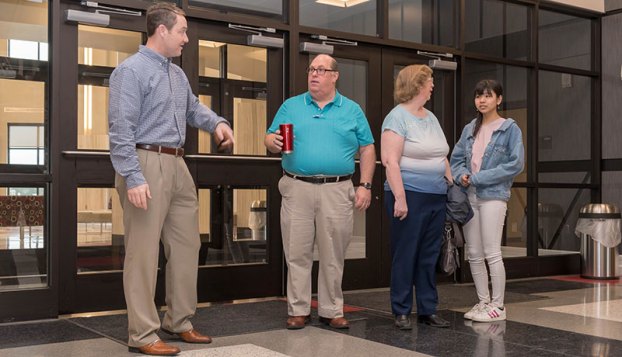 ALABASTER – A smile quickly spread across 17-year-old Yuuka-san’s face when she walked into the art academy classroom at Alabaster’s new Thompson High School on the morning of March 29.

After touring the room, Yuuka said she would enjoy using the artistic materials available to the THS students, especially to further her aspirations of one day becoming a fashion designer.

“It’s very wonderful,” she said, nodding when asked if she’d like to attend school there.

The trip to THS was one of the highlights of Yuuka’s weeklong trip to Alabama, which began on March 24 and will end on April 2. While here, she is staying with Alabaster residents Ken and Susan Daniel, whose daughter, Megan, teaches conversational English at Yuuka’s high school in Echizen, Japan.

Ken Daniel said Yuuka wanted to come to the United States during the few weeks she has between her junior year, which recently ended, and her senior year, which will begin in mid-April at Echizen’s Nyu High School.

Nyu High School, and the Japanese educational system, differs significantly from American schools such as THS. Daniel said Yuuka’s school, which was built before World War II, does not allow female students to wear makeup or jewelry or have cell phones in the classroom, and does not employ janitors because the students are responsible for cleaning the school each week.

Instead of changing classrooms, students at Nyu remain in the same classroom all day, and teachers rotate to different rooms throughout the day. Students remain in their classroom for lunch each day, which typically consists of a Bento box prepared for them.

While at THS, Hester showed Yuuka and the Daniels an English classroom, the Junior ROTC room, a computer lab, the band and choir rooms, the health sciences academy – which features a life-size ambulance replica and a mock emergency room – and more.

The visit allowed Yuuka to get a better understanding of her favorite subject at school: English.

“She is the president of the school’s English club, and she loves it,” Ken Daniel said. “She’s interested in seeing what schools in America are like.”