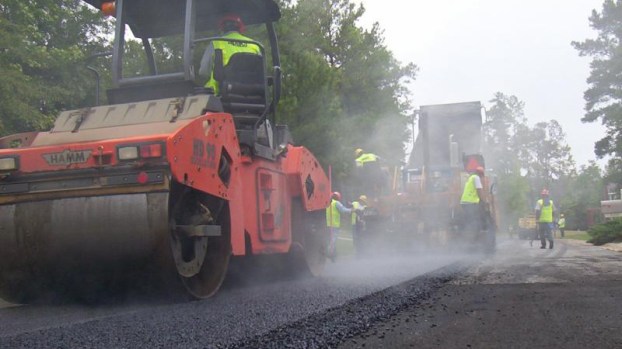 The Shelby County Highway Department will oversee a project to resurface about 30 miles of roads across the county during the current fiscal year. (CONTRIBUTED)

The Shelby County Commission was presented details at its meeting on Monday, March 26, of the project for Fiscal Year 2018 by County Engineer Randy Cole.

The project includes the resurfacing of more than 30 miles of roads across the county, with a total of 54 items listed in the project.

The low bidder on the project was Wiregrass Construction at $5.471 million, Cole said and added that the bid would be brought before the Commission for its approval at its next meeting, on April 9.

Money for the project would come from the county’s funds, not including any Alabama Transportation Rehabilitation and Improvement Program projects.

Factors used to determine which roads are resurfaced each year include the condition of the roads, its usage and funds available, Cole said.

“We try to get the best bang for the buck,” he said.

Last year’s resurfacing project was bid for about $2.5 million, Cole said, and County Manager Alex Dudchock added that more money is available for the project this year because of the county’s conservative approach to budgeting and spending.

Cole also provided updates on a couple of other local road projects.

The Cahaba Beach Road project is still in the environmental investigation phase, Cole said, with officials studying any potential environmental effects of the project.

Several options, including “no build,” remain on the table.

Meanwhile, a project for a new bridge over the Cahaba River on Caldwell Mill Road is seemingly no closer to fruition than it was about five years ago, Cole said.

County officials are in the process of acquiring rights-of-way for a project to replace the bridge over the Cahaba River on Shelby County 52 in Helena, Cole said.

•Heard from a resident of the Vandiver/Sterrett area about the need for more police patrols to combat recent drug and theft problems.

•Approved a contract for the Alabama Department of Transportation to “resurface, plane, traffic stripe, level and patch” U.S. 31 from the Chilton County line to Seventh Avenue in Calera.

•Heard from Dudchock that the mother of a local teenager killed in a car wreck in February will donate the vehicle the girl was traveling in to the county to be displayed as part of efforts to curtail distracted driving.

•Approved a proclamation naming the month of April as Fair Housing Month in Shelby County.

•Approved a resolution stating that no bids were received for “oil changes and related services,” so purchases will be made as outlined in state bid law.

CHELSEA – Gabe Griffin’s crusade against Duchenne muscular dystrophy has taken him across the country, but the next battle is... read more