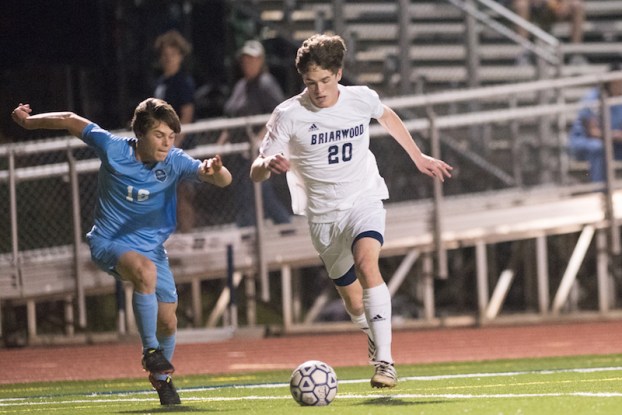 Briarwood's Logan Frost, above, had another stellar game as he helped lead the Lions to their 12th straight win and an area championship. (Reporter photo/Keith McCoy)

NORTH SHELBY – A strong run for the No. 1 ranked 4A-5A boys soccer team in the state doesn’t seem to be coming to an end anytime soon as the Briarwood Lions continue to steamroll through their competition.

With it being their fifth consecutive area win this season, Briarwood didn’t just keep its win streak alive, but also won its 17th area title in school history.

The Lions haven’t just scored 73 goals during their 12-game winning streak or picked up four mercy-rule wins, but have shutout opponents in nine of the 12 during that time span.

Briarwood now has 12 shutouts this season and has yet to give up more than three goals in any game this season as the defense has been on par with the offense thus far.

The excitement started early in the game for the Lions as Logan Frost and Griffin Felton, two of the team’s leaders, took turns assisting and scoring.

To open the scoring, Frost threw the ball in from the right side line and found Felton near the box, who then proceeded to fire a goal into the back of the net with ease for the early 1-0 lead just 5:40 into the game.

It took almost two minutes on the nose for them to swap positions as Felton got the ball on the far side line and then crossed a ball perfectly into the box where Frost awaited his pass. Frost somehow reached the ball narrowly with his head and got enough power to put a magical header just out of reach of the goaltender for the 2-0 lead with 32:19 remaining in the half.

Just over seven minutes later, Frost added his second goal of the game to put Briarwood on top 3-0 and continue his stellar play.

Calera finally started to get some looks over the next few minutes, but Briarwood shut down that shift in momentum quickly with 15:21 left in the opening half.

The scoring play started when Jackson Stubbs found Hamilton Bowen streaming up the left-hand side of the field. Bowen then took the ball all the way down just wide of the box before eventually finding Jay McClung right in front of the goal for the easy shot to put the Lions on top 4-0.

Less than a minute later, Bailey Morman used some great dribble moves in the box before eventually finding his shot and nailing it into the back of the net to put Briarwood on top 5-0 at the break.

The most exciting moments of the first half may have come when Frost didn’t actually score a goal.

At one point he attempted a bicycle kick that went a yard right of the goal and then near the end of the opening period, he found himself sprinting all alone up the far side line before eventually facing an open net opportunity.

Coming from an odd angle, Frost hit the post and missed the shot before letting out a scream even an opera singer would have been jealous of, while the bench and teammates couldn’t help but let out a chuckle.