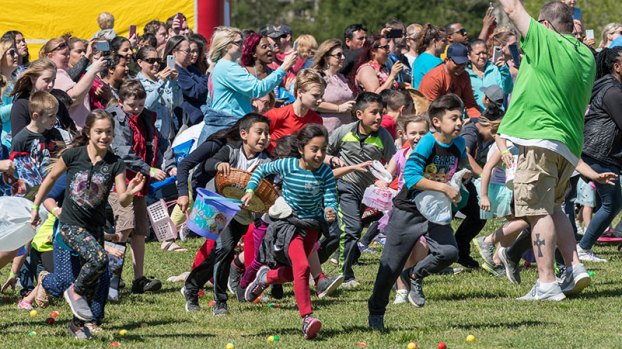 ALABASTER – For the first time in the five years Cultivate Church has been hosting a helicopter egg drop in the city, it ran out of space at its venue.

“This year, people didn’t even make it into the park. If you came to the event and you did not get to come in, we are so, so sorry,” Cultivate Church Lead Team Pastor Brandon Matthews said in a video posted to the church’s social media accounts after the March 31 event. “There is no way for us to anticipate the number of people who are going to participate, but it was unbelievable the number of people who came this year.”

While Matthews said he was unsure the exact number of people who attended this year, it was significantly more than the 12,000 to 15,000 who attended last year.

“It was a beautiful, incredible, exciting day. We served thousands and thousands and thousands of people in Shelby County today just letting people know the goodness of God, no strings attached,” Matthews said. “It was one of the most exciting egg drops we’ve had just because of the number of people we served and the number of people we had serving. It’s amazing watching people come together to just love on other people. There’s nothing better than watching people love Jesus and love other people.”

The church started holding the event in Alabaster in 2012, and held another in 2013, both of which were at Thompson High School’s Larry Simmons Stadium. After a two-year hiatus, the church brought the event back in 2016, and has continued the tradition every year since at Veterans Park.

This year’s event featured an egg hunt for children younger than 3 and a pair of helicopter egg drops for kids ages 4-6 and 7-12. Before each session, kids lined the perimeter of the egg hunt field and waited for church officials to give them a signal to begin before rushing to grab the candy-filled eggs.

“We just want you to know from Cultivate Church that we love you and that God loves you and we hope your family was just blessed by the goodness of the hearts of the people at Cultivate Church today,” Matthews said.

THS teacher named as LifeChanger of the Year finalist

ALABASTER – Thompson High School pre-engineering teacher Brian Copes was recognized as one of the top five contenders for the... read more