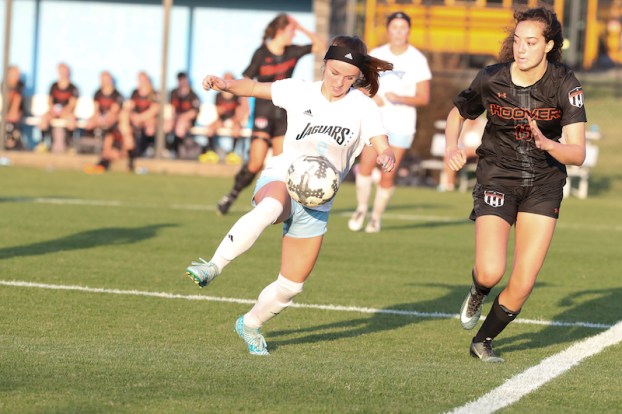 HOOVER – A ranked rivalry matchup in girls soccer lived up to the billing Tuesday night, April 4, as the No. 3 Spain Park Jaguars held on at home to down the crosstown rival Hoover Buccaneers 3-2 in their first meeting of the 2018 season.

Spain Park (11-3) has now won four in a row and six of its last seven games keeping their momentum going after a week off from spring break.

Jaguars’ head coach Robert Starr acknowledged there was some worry about the team’s performance with the time off, but said he was pleased with their effort.

“Coming off of spring break you’re always concerned about how everybody’s going to look and we were doing some good things before the break,” Starr said. “We’ve got a full week this week but we’ll certainly take the win and we can learn some things from the goals we gave up tonight.”

Spain Park started the game from behind as Hoover freshman Sarah Harrell launched a shot from the top of the box in the into the right side of the net for a 1-0 lead in the ninth minute.

The goal served as a wakeup call for the Jags, as junior forward Haley Greene wasted no time scoring two minutes later on a nifty move to get by the last defender in the box then popping a shot by the goalie with her left foot for the early equalizer.

Greene was an absolute force in this game showing off her ball handling skills and dribbling around Buccaneer defenders with ease the entire night.

She played the role of facilitator for the next Jaguar goal dribbling between two defenders then finding teammate and fellow forward Jasmine Greene with a nice touch just inside the box.

Jasmine powered the go-ahead goal into the left side of the net for a 2-1 lead that Spain Park took into the halftime break.

The Jags put four of their six shots on goal in the first half, while Hoover was able to keep three of their four shots inside the posts.

The Bucs had their chances with four free kicks in Spain Park territory including two just outside the box that bounced off the right post while the other missed just right of the goal.

SPHS stayed aggressive the remainder of the night and though the score didn’t indicate it, kept the ball on Hoover’s side of the field for most of the match.

All seven corner kick attempts were turned away by the Buccaneers, but the Greene to Greene connection wasn’t done for the Jags.

In the 58’ minute, Haley Greene again controlled the ball and sent a long pass just inside midfield to a streaking Jasmine Greene who controlled the ball after a whiffed clearance by a Hoover back fielder and blasted her second goal of the game on a one-on-one with the goalie for a 3-1 lead.

“They’re two of the most dangerous attacking players in the state,” Starr said smiling. “Their pace, their strength. Haley does a great job with ball skills and Jasmine is so strong, but there’s no question it’s a huge compliment up top and gives us a chance to be in most games whether we make mistakes and give up goals or not.”

Hoover (10-4-2) made things interesting in the last 20 minutes earning a free kick in the box in the 63rd minute, but Jaguar freshman goalie Vivian Gray made a huge save to preserve the two-goal advantage.

It proved fortuitous as Hoover scored five minutes later off a botched Jaguar clearance with freshman Lauren McEwan tapping in the Bucs’ second and final goal.

Spain Park will finish this week with a back-to-back starting with the Gardendale Rockets this Thursday, April 5 at 5:30 p.m. and then head to Georgia to face Mill Creek High School Friday at 5 p.m.