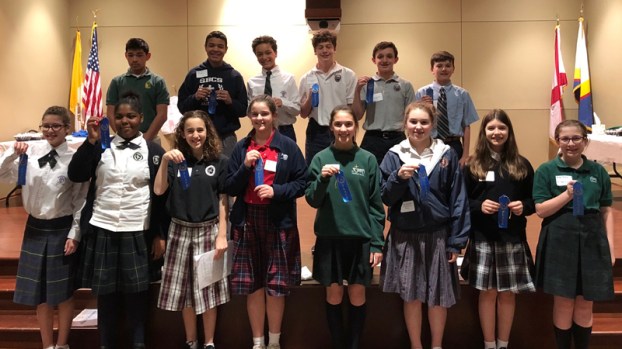 The RSB was started by OLV teacher Winnie Lucas Martinez more than three decades ago for students in grades 3 through 8 with the highest religion grade.

They are given oral and written tests on their knowledge of the Catholic faith taught per grade level. Teams are divided by grade level instead of by school to create a unified atmosphere.

The schools that participated in the March 7 Diocesan Religion Schools Bowl were: St. Barnabas, Holy Family, St. Francis Xavier, Our Lady of the Sorrows, Our Lady of the Valley, Prince of Peace and St. Aloysius, all from the Birmingham-metro area; and Holy Spirit, Hunstville; St. Ann’s, Decatur; Sacred Heart, Cullman; Sacred Heart, Anniston; and Saint John the Baptist, Madison.

Teams were composed of one student from each grade. Competition consisted of a 25-point matching test, which was taken in cooperative groups, as well as three oral rounds of questions.

For more information about Our Lady of the Valley Catholic School, visit OLVBirmingham.com.