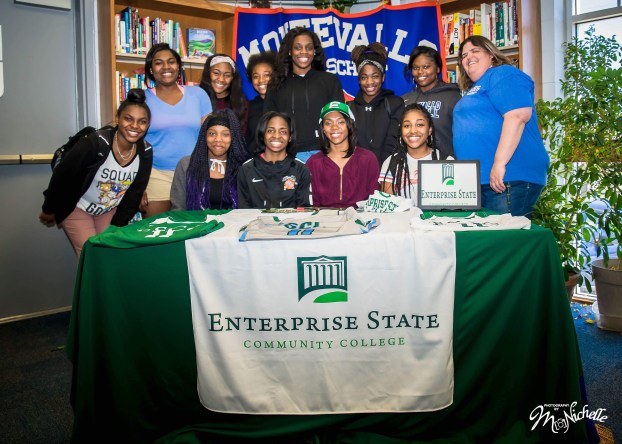 MONTEVALLO – Not many people have stepped on the hardwood and had the impact Lauryn Lilly has at Montevallo for the last four years.

A three-point loss in the Sweet 16 of the Class 3A playoffs on Feb. 19, brought to an end a stellar four-year career that saw Lilly become one of the best players to ever step foot on a basketball court in Shelby County.

While the journey in Montevallo blue and orange has come to an end, Lilly is set to take the next step in her life after recently signing to continue her basketball career at Enterprise Community College.

“It feels really good,” Lilly said. “I just wanted to continue my career in basketball and am excited that they gave me an opportunity to do that.”

It’s a dream that Lilly first had in third grade when she started playing basketball with the Upward AAU team. But it wasn’t until her fourth grade season that she really felt the passion for the game that sparked the hard work and dedication to get to this point.

During that fourth-grade season, Lilly met and played with Alasha Reed. The two instantly bonded on and off the court and became best friends, not knowing they’d be a future dynamic duo for the Bulldogs.

The two technically met at birth as their families have always been close, but finally getting to play together on the basketball court not only highlighted their friendship, but also complimented each player’s playing style perfectly leading to stellar careers.

“I wanted to get both of them on the team as soon as I could,” head coach Tena Niven said. “We picked them up after the middle school season had ended in both seventh and eighth grade and let them get experience at the varsity level. Before we knew it both were starting during their eighth grade season.”

Lilly was able to remarkably finish on the All-County first team all four of her seasons during high school and was named as Shelby County’s Player of the Year as a freshman.

It wasn’t always easy for Lilly, however, who like most athletes battled with the desire to keep pushing on in her career.

“Sometimes I wanted to just give up, but I think my uncle helped me push through all of that,” Lilly said. “He was always at the gym with me and helping me work out or find people to train with.”

Her uncle, Lawrence Lilly, was a graduate of Montevallo High School and a tight end for the University of Mississippi.

His own experience was able to help motivate and drive Lauryn, who went on to score 2,588 points during her career at Montevallo.

A big reason for that success wasn’t just her uncle’s support or her years of experience, but also her work ethic. Lilly put in work after practice and on the weekends to better her game, including shooting with the gun and taking 100 free throws having to make a certain amount before she could leave.

She also had a burning competitive desire that spurned her success as well.

“She always wanted to challenge the best out there,” Niven said. “Our entire team would get upset when bigger schools weren’t on our schedule. When we did get to go up against a bigger school in a higher classification, they just looked at it as five more girls on the court that needed to be beat. That’s something that’s tough to instill.”

While her size at 5-foot-7 wasn’t considered to be the tallest, or what most colleges were looking for, that’s something that also burned a fire inside of her.

“It was upsetting,” Lilly said. “Every school that came by wanted height and didn’t think I fit what they needed.”

Despite that talk from a few schools, it took just 10 minutes of watching her game for Enterprise to fall in love with her.

“They came up that first game to check her out,” Niven said. “I felt a tap on my shoulder in the second quarter of the game, I turned around and the coach said simply ‘We want her.’ From that point forward they came by all the time and stayed in touch to make sure she was going to join them.”

As one of the better academic community colleges, Enterprise has also promised to help Lilly pursue her dream of making it to a four-year college once her days at the two-year school have come to an end.

It’s going to be a nerve-wracking journey, but one that has Lilly excited to meet new people and begin a new chapter, that most importantly includes continuing to play the game she loves.

“I’ve never had to worry about her in six years playing for me, and I know that there’s nothing to worry about as she makes this transition to the next level,” Niven said.

By ALEC ETHEREDGE | Sports Editor VINCENT – When Wiley McKeller left Calera High School at the end of the... read more