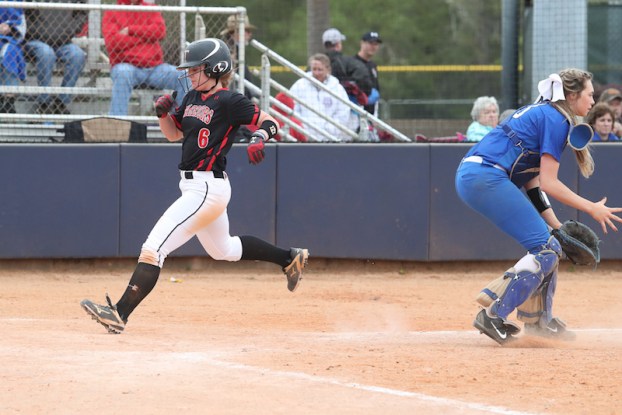 Spain Park made easy work of Huffman on Tuesday night to pick up its third win in a row and its fourth consecutive area victory to move to 4-0 in area play.

With one area game against Mountain Brook and another against Oak Mountain left, the Jags are now two wins away from winning the area championship and hosting the area tournament.

Against Huffman, the Jags scored 13 runs in the first inning and went on to score three more in the second and one in the third to end the game in three innings.

Kate Campbell held the Vikings in check as she tossed a no-hitter in the shortened three-inning win and struck out seven batters.

Bailey Bowers continued a strong season offensively as she led the Jags at the plate with a 2-for-2 game that included three RBIs and three runs scored, both game-highs.

Maddie Majors also had a two-hit game, while also tacking on an RBI and two runs. Campbell ended the game with multiple RBIs driving in two runs after a 1-for-3 game. Five others had one hit and one RBI in the game.

There may not be a hotter team in the state right now than the Thompson Warriors, who have now won 13 consecutive games after taking down Tuscaloosa County 18-2 on Tuesday to improve to 3-1 in area play.

The Warriors scored multiple runs in every inning of the game to pick up the mercy-rule win in just five innings. Thompson scored two runs in each of the first three innings before finishing the game off with five runs in the fourth and seven more in the fifth for the blowout.

The Wildcats were only able to score two runs, one in the second and one in the fourth, as Bailey Whitfield was in a zone in the circle allowing just three hits and striking out four.

Madison Bubel had a monster day at the plate driving in five of the Warriors’ 18 runs after going 2-for-2 with a walk. Allie Miller also had a solid outing as she went 3-for-4 with two RBIs. Thompson also got a home run from Sidney Adams.

In all, 10 different players had a hit for the Warriors, while seven added at least one RBI.

Thompson is now 33-5 overall this season with just three weeks left in the regular season.

Chelsea gave up five second-inning runs to Hoover and couldn’t recover, as the Hornets went on to lose 6-0 a night after taking down Oak Mountain by one run.

The first five batters of the Chelsea order had at least one hit in the game, while Camryn Smith had a two-hit game, but all of them were left on base in the loss.

Abigail Bryars was able to go the distance in the circle, to give other pitchers some rest. She allowed nine hits and six runs while striking out five.

The Hornets are now 10-13 overall and 0-3 in area play, but have the firepower to get hot heading into the area tournament.

An up and down season for the Briarwood softball team saw the Lions pick up their first area win against Sylacauga on Tuesday by a final of 6-2.

After losing to the Aggies 5-4 a month earlier, it marked a crucial bounce-back win, as Briarwood looks to build momentum during the last couple of weeks of the season to pull off a win in the area tournament to make the 2018 postseason.

Shelby County gave a run at taking down Moody on Tuesday night as the two teams battle for host of the upcoming area tournament, but the Blue Devils were able to comeback for a 6-4 win.

Six different Shelby County players had a hit in the game, while Nataley Whitner went 2-for-4 with one RBI to lead the way.

The Bulldogs of Montevallo picked up their second consecutive win by at least 10 runs after taking down 6A opponent Homewood 11-1 on Tuesday night.

A night earlier, Montevallo took down Indian Springs 15-0 thanks to 13 hits offensively. Less than 24 hours later, the Bulldogs’ bats were still hot as they picked up 14 hits to pull off the mercy-rule win.

Montevallo scored three runs in the first, fourth and fifth innings, and scored two runs in the third to pull off the easy victory.

Georgia Hughes had a strong afternoon at the plate and in the circle for the Bulldogs. Hughes was able to baffle the Patriots’ hitters all night as she went the distance allowing five hits and one unearned run while striking out five.

At the plate, she ended the game 2-for-3 with two RBIs and two runs scored. Hughes was one of five players to pick up two hits in the game, while Candace Underwood also added multiple RBIs with a game-high three.