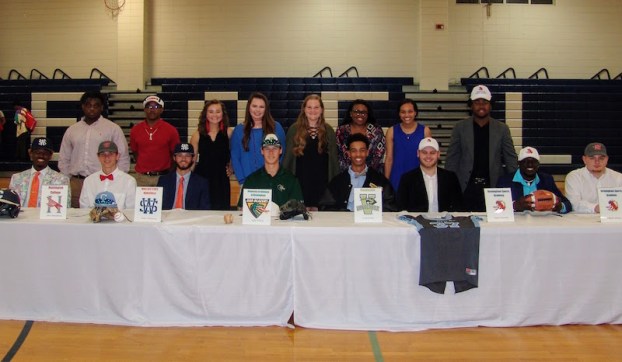 Calera had a total of 16 student athletes sign with colleges or preparatory schools on Wednesday, April 11, as they prepare to continue their academic and playing careers. (Contributed)

CALERA – It was a special day at Calera High School on Wednesday, April 11, as a table covered in pictures and sporting equipment lined the middle of the Eagles’ gym.

At that table were 16 student-athletes sitting in front of family, friends, coaches and fellow students as they prepared to sign scholarships to continue their academic and playing careers at the next level.

The ceremony included six football players, five baseball players, four softball players and one volleyball player as each got the chance to stand up and give a short speech before announcing where they were headed.

Two of those athletes signed Division I scholarships as the baseball team’s Jacob Smith and Tyler O’Clair saw years of hard work pay off.

Smith, who is one of the best pitchers in the state, is headed to Vanderbilt University to join the Commodores after being named the Shelby County Co-Player of the Year last season with Briarwood’s Sam Strickland.

Showing how prestigious that honor was for him, Strickland has gone on to Samford University and become one of the best pitchers in all of Division I baseball.

O’Clair is staying in state after he signed a scholarship to join the University of Alabama at Birmingham. A catcher and a pitcher for the Eagles, O’Clair has been one of the most dominant players in the county the last two years and has Calera poised for a title run this year.

Of course neither would be in the situation they are in without other great teammates as well, three of which signed impressive scholarships of their own.

Kevin Dowdell, a two-sport star, and Austin McKinney, are both headed to Wallace State Community College in Hanceville. Both are having incredible senior seasons and easily have the talent to make it to a four-year school in the future.

The final baseball player to sign was Chris McGibboney, who signed with Huntingdon College, which has become a popular destination for local players and has a proud tradition when it comes to baseball.

“This is probably one of the best classes I have seen come through as far as baseball goes,” Athletic Director Chris McCrackin said. “I’m really going to miss each and every one of these guys.”

The football team had the most players of any sport sign to continue playing the game they love as six athletes made it official at the ceremony.

Of those six, Dyson Edwards, Zakiyah Johnson and Dee Mickens, who was featured on the cover of the Shelby County Reporter’s football magazine, will be headed to Birmingham Sports Academy for the next year.

BSA is a preparatory school that is meant to shape and mold these young athletes to make them ready both academically and athletically for the next step.

Two other athletes are going to preparatory schools as well. Anthony Washington is headed to the Birmingham Prep Cardinals after sitting out his senior season with an injury. The Cardinals are the defending NPSAA National Champions.

Jermaine Ross, a smaller, but incredible defensive back, will be attending Jefferson Prep College as he looks to continue making a name for himself.

The final player that will be continuing his career is linebacker Ethan Lemley, who is joining McGibboney at Huntingdon College.

“This group really means a lot to me,” McCrackin said. “I coached them in middle school and then moved up to coaching them in high school as well. I’ve been with them for the last five years and it’s a very special group.”

Following the football team, four softball players got the chance to announce where they will be continuing their playing careers and it was an emotional moment for McCrackin, who is their coach, as well as the players.

Charley Clark became the third athlete to sign a Division I scholarship during the ceremony as she will be joining O’Clair at UAB next year. Clark is a player that can play all over the field and has been one of the county’s best softball players in a softball-rich area over the last several years.

Fayth Bryant, a first baseman with the Eagles, will be headed not too far down the road from Clark as she signed to continue her career at Miles College.

Ashlynn Hamm, who has been a dominant pitcher for Calera, signed to play her college softball at Lurleen B. Wallace Community College for the next two years.

The final softball player to announce was Madison White. The senior plays catcher and outfield, and will be attending Martin Methodist College in Tennessee.

“This group of girls has been playing for me since the seventh grade,” McCrackin finally said after taking a few emotional seconds to gather himself. “They’re really going to be missed. We’ve been through a lot of ups and downs, and I love every one of them. They’re special.”

The final athlete to sign was Kayla Thomas, who will continue her volleyball playing days at Wallace State Community College after a strong career with the Eagles.

“She’s by far one of the sweetest people I’ve ever met,” McCrackin said. “Every time you see her she has a smile on her face. She works hard and has been a good and vocal leader.”